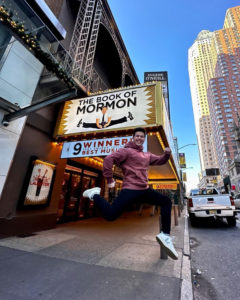 University of Arizona School of Theatre, Film & Television alum Tony Moreno (BFA Musical Theatre, ‘21) is set to make his Broadway debut in The Book of Mormon. Moreno will be vacation swinging for The Book of Mormon on Broadway – a dream he says has been decades in the making.

In his post announcing the news, Moreno thanked the educators and supporters who’ve helped him along the way. “To the teachers, the mentors, the believers-in-me—who have seen me grow and shaped me into who I am today: I owe it all to you. There is no sufficient amount of gratitude I can send your way to let you know how grateful I am to have had you there to guide me.”

Tony’s mentor, TFTV’s Head of Acting Hank Stratton, said “Following his graduation in 2021, it’s been my privilege to continue my role as mentor: reviewing self-tapes, offering career advice, or merely lending an understanding ear. My belief in his professional potential remains as strong today as it was when he first auditioned for us. And so here we are, a year and some change after graduation and he’s making his Broadway Debut in one of the longest running shows in Broadway history. This is an extremely proud moment for all of us.”

Since graduation, Tony has also performed in Spring Awakening at the Northern Stage Theatre in Vermont, released a debut EP entitled Gaze, and was cast in a leading role in Sensation, a new original musical.