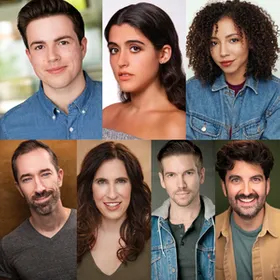 University of Arizona School of Theatre, Film & Television alum Tony Moreno (BFA, ’21) has been cast as the lead in the brand-new original musical Sensation, which will present its first industry reading on Thursday June 9, 2022 in New York City.

The musical follows seventeen-year-old Blane Parker (Moreno). who is as talented and terrified as it gets. He’s got the soul, the voice, the songwriter’s sensibility, but he can’t muster the courage to step into the spotlight. So when his best friend, Mandy, posts a video of his original song behind his back and it goes viral the very next day, Blane is forced to make an impossible decision. Does he capitalize on the momentum he claimed not to want? Or does he reject all the virtual attention and go back into hiding, left to forever wonder what could have been? This is the story of what happens when fame finds you. This is Sensation.