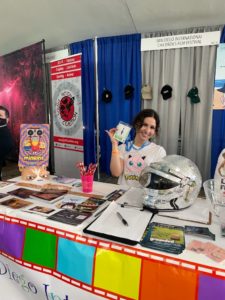 University of Arizona School of Theatre, Film & Television alum Alexandra Cerna (BFA, ’21) was recently interviewed by The Daily Wildcat about her senior thesis film, Treasures Beneath My Tree, its festival success, and her future plans.

“‘Treasures Beneath My Tree’ is my pride and joy,” Cerna said. “It’s a five-minute short film about my childhood, about the innocence and beauty in which children view the world – so newly, so colorfully. Everybody has their special items, I guess, that link them to their childhood, to memories, so this film really explores the idea of nostalgia through items.”

Cerna spoke to the impact that mentorship and guidance from Director of Advancement and External Relations Kerryn Negus had upon her and on the film’s growing festival credits. The success includes a recent screening at the San Diego Children’s Film Festival during San Diego Comic-Con and its upcoming international debut at Festival Ciné Junior in France in February 2023.

“I didn’t know anything about the film festival world. [Negus] completely taught me everything … To have somebody who believed in me and was always on the lookout for festivals she thought would be the best for my film really helped,” Cerna said.

Looking ahead, Cerna hopes to start working on her next short film as well as explore the world of children’s animation. In addition to her next film projects, Cerna has started her own production company, Crescent Disco.

Read more at The Daily Wildcat