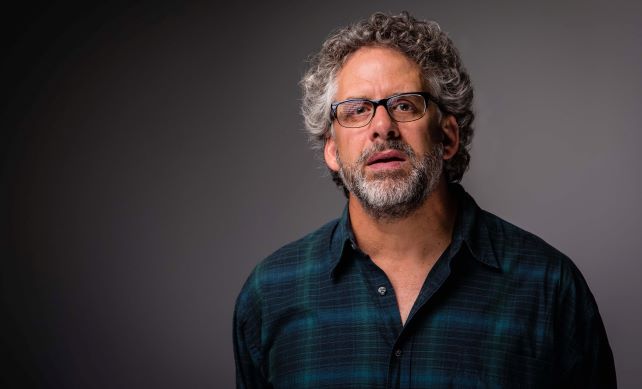 Andy Belser is the Director of the School of Theatre, Film & Television at the University of Arizona. Andy comes to the University of Arizona from Penn State University where he was a Professor of movement, voice and acting in the MFA Performance program.  At Penn State Andy was also Director of the Arts and Design Research Incubator, a studio laboratory where artists and designers join with scientists, writers, philosophers and others to research and create artistic projects for national/international venues. Andy was honored to serve as the Penn State Laureate in 2017-2018.

Belser was the founding Artistic Director of The Gravity Project, a professional theatre company, international performance research center, and new work incubator. Belser’s teaching and directing career has centered on devising new work and revisioning classics, movement forms, voice/breath work, interdisciplinary theatre approaches, and solo work. He regularly directs and mentors new projects, particularly solo work, and is the director of Michelle Krusiec’s award-winning solo play Made in Taiwan. He is a certified Feldenkrais® practitioner, a Master Teacher of Fitzmaurice Voicework®, and Creative Director for the Fitzmaurice Institute.

Belser is currently writing a book The Performer’s Field Guide to Applied Neuroscience, scheduled for publication by Routledge. Belser maintains an active schedule of teaching acting workshops and individual actors in New York, Los Angeles, and other international locations.

We are so proud of all of the participants for this years symposium, and congratulations to all of the prize winners!

Thank you all for tuning in with us, and remember, all of the presentations are available to view at urs.tftv.arizona.edu.

When the world takes your smile, you put a new one on! Rachel Newcomb keeps a smile on her face and finds her groove in "From the Fishbowl."

From the Fishbowl, a co-presentation of the School of Theatre, Film & Television and The Scoundrel & Scamp Theatre, is streaming now! Watch from anywhere, any time through April 18. Tickets are $11 per device and can be purchased at:
am.ticketmaster.com/arizonaarts/fromthefishbowl#/

In a recent story for The Theatre Times, "From the Fishbowl" director Wolfe Bowart and lighting designer Forrest Tallbull reflected on the journeys that brought them to this theatrical moment, the process of devising physical theatre in a digital space, and what new value “a world interrupted” has brought to their theatre-making.

"From the Fishbowl" also served as Lighting Designer Forrest Tallbull's MFA Senior Capstone Project in Lighting Design. "From the Fishbowl features vignettes that combine our digital culture with the stage," Forrest said in the article. "The stories are about shared messages of emotional humanity that show our true selves—selves we evade in the digital world. When I arrived, there was no script or outline. Wolfe [Bowart, director] wanted to hear ideas from the entire creative team, including the actors, designers, and even the stage managers. Wolfe said, “if you had a minute onstage to talk to the world—what would you say?” That was the starting point of the creative process. Designers not only contributed to the design elements of the spectacle; we were invited to tap into the emotional creation of the stories."

Watch the magical result online now. From the Fishbowl streams online April 1 - 18, 2021. Watch any time, from anywhere. Tickets are $11 per device. Read more at:

TONIGHT :: In "From the Fishbowl," MJ Barbee plays a contestant in a raucous game show where panelists goad him into being the personality they want him to be.

From the Fishbowl began with a question and a challenge. Director Wolfe Bowart asked 7 cast members – all students at the School of Theatre, Film & Television – what story would they tell if they had a minute to say something to the world right now. And could they tell their story using visual theatre? With the help of sound effects, movement, illusion, shadow puppetry, film interaction, comedy - and an occasional call from mom - discover some serious subject matters told with heart and humor.

Join us as we stream the PREMIERE SCREENING followed by ARTIST TALKBACK tonight, April 1, 2021, at 6pm MST.

FROM THE FISHBOWL, a co-presentation of the School of Theatre, Film & Television and The Scoundrel & Scamp Theatre, streams online April 1 - 18, 2021. Watch any time, from anywhere. Tickets are $11 per device. Tickets available at bit.ly/tftv_ftfb.

Move over La Sirena. Linda Paola Varela picks up a magical remote control and brings all new lotería cards to life in "From the Fishbowl".

"We combined live performance and video performance with animated visuals, puppetry and magic. It's intricate, hopeful, deep and magical, and it’s been a privilege to have been able to create this new work that speaks so uniquely to the time we’re in," says Linda.

FROM THE FISHBOWL, a collaboration of the School of Theatre, Film & Television and The Scoundrel & Scamp Theatre, will stream online April 1 - 18, 2021. Watch any time, from anywhere. Tickets are $11 per device. Tickets: am.ticketmaster.com/arizonaarts/fromthefishbowl#/