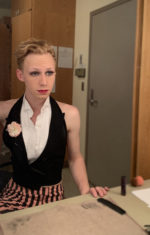 It was a lazy December Sunday. Xander Mason was a bit tired, after performing in eight shows that week.

Mason, a junior at the School of Theatre, Film & Television, had auditioned for the Arizona Theatre Company’s production of “Cabaret,” primarily to get experience auditioning.

Happy surprise. He landed the featured role of Bobby for a professional company for a two-month run. The company launched into an intense six weeks of rehearsals, six days a week, eight hours a day.

Those rehearsals came in handy on that lazy Sunday.

After a successful opening week of eight shows, Mason gets a call from Sean Daniels, artistic director of the Arizona Theatre Company. He tells Mason that the actor in the lead role of the Emcee was too sick to do the matinee.

“Xander, can you go on today in the role?”

Mason wasn’t the understudy. He hadn’t rehearsed the role, sang the songs or read the dialogue.