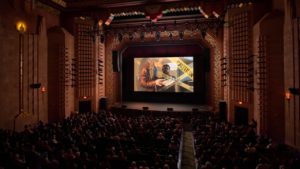 Tucson, AZ (July 9, 2020) – The University of Arizona’s School of Theatre, Film & Television presents the 15th edition of I DREAM IN WIDESCREEN (IDIWS), the annual showcase of undergraduate thesis films celebrating a wide range of new filmmaking voices. This year, the event will include a series of sidebar conversations featuring industry luminaries who are all alumni of the School of Theatre, Film & Television.

The 2020 edition of I DREAM IN WIDESCREEN will be presented on YouTube on Saturday, August 8 and Sunday, August 9 (youtube.com/UASchoolofTFTV). Films will compete for prizes awarded by this year’s Jury: Austin Film Festival’s Film Competition Director Rob Gonzalez, producer of the Emmy-winning series After Forever Allison Vanore and film critic and journalist Katie Walsh (Los Angeles Times, IndieWire, Vanity Fair).

“Located an hour’s drive from the Mexican border and a short flight from Hollywood, the UArizona School of Theatre, Film and Television has built over time a reputation for nurturing and elevating diverse voices and original, brave visions” said Andrew Belser, Director of University of Arizona’s School of Theatre, Film & Television. “We’re thrilled to share our student and alumni talent with a larger audience and hope that this unique slate of films and behind the scenes stories from our impressive cadre of alumni will be a welcome, energizing and uplifting addition to the streaming-scape, and bring new perspective to our business.”

The IDIWS 2020 schedule of events is as follows:

The Influencers
Tyler Gillett + Lindsay Utz
The co-director of Scream 5 and the editor of this year’s Academy Award-winning Best Documentary, American Factory, in conversation about shaping the art of tomorrow’s cinema.

New Voices
Darious Britt + Christopher Cegielski
A lively conversation between these emerging directors will look at how they were able to get their projects made and the challenges – and opportunities – that face new filmmakers in today’s entertainment landscape.

Festival World
Mike Plante
In a discussion with one of this year’s graduating filmmakers, we learn what a Sundance Film Festival programmer looks for when deciding which projects to include in a world-renowned film festival.

The Actors
Kyle Harris + Vinessa Vidotto
with Carly Natania Grossman and Michael Schulz
Two of today’s most up-and-coming television actors are joined by the next generation of acting talent to discuss what it takes to be cast, how to stand out and some of the challenges facing actors in the current environment.

Notes to the Editors:

Link to the IDIWS 2020 trailer can be found here:
https://www.youtube.com/watch?v=d8D7UNRcIAo

About I Dream In Widescreen
I DREAM IN WIDESCREEN is an annual year-end celebration of The University of Arizona School of Theatre, Film & Television student thesis films. Previously held at the historic Fox Tucson Theatre and now in its 15th year, films from the graduating class compete for prizes to be awarded by a panel of noted jurists from a cross-section of the entertainment industry.

About the School of Theatre, Film & Television
The University of Arizona School of Theatre, Film & Television (TFTV) aims to nurture and develop outstanding artists and scholars by providing rigorous training and mentoring by internationally recognized faculty, excellent internship opportunities, industry-standard resources, and hands-on production experience. TFTV offers comprehensive training programs that aim to prepare students to succeed in a wide range of careers – in the industry, the arts, and higher education. Each year through Arizona Repertory Theatre productions, the Studio Series, and Film & Television screenings, students of TFTV are able to showcase their talents, tell compelling stories, and provide clear results of what happens in their classrooms and studios. In late 2019, TFTV’s Film & Television program was ranked #25 in The Wrap’s “Top 50 Film Schools,” and the School’s Theatre programs regularly rank in Onstage’s “Top 30 College Musical Theatre Programs” and “Top 30 College Theatre Design & Tech Programs” making UA one of the country’s top institutions to study theatre, film and television.