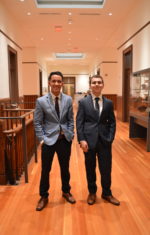 Tucson, AZ – The School of Theatre, Film & Television is proud to announce Stephen Morand and Cole Potwardowski as the winners of the 7th annual Undergraduate Research Symposium.  This annual event provides junior and senior students from the University of Arizona with the opportunity to present original research in the areas of theatre, film and television to the public.

The School of Theatre, Film & Television was honored to have Dr. Chiara Ferrari from California State University, Chico and Dr. Hillary Miller from Queens College present keynote speeches to kick off the event.  Professor Ferrari presented “Curiosity Save the Grad: Tips on Student Research” followed by the address by Dr. Miller, “Evicted: The Theatricality of Austerity in the 20th and 21st Century Dramatic Literature.”  These professional scholars also served as judges evaluating the student work and determining the winners in each category.

Junior Stephen Morand was selected as the winner of the 2019 Innovative Scholarship Award in Film and Television Studies with his paper “Sacralizing Reality.”  Morand’s paper focused on the work of the Italian film director Pier Paolo Pasolini, and explored his films’ intersections between Catholicism and Marxism.

Senior Cole Potwardowski was selected as the winner of the 2019 Innovative Scholarship Award in Theatre Studies.  Potwardowski’s paper, “Acting and Presence:  The Spirituality of Live Performance,” traced connections between Stanislavski’s “method” acting and various spiritual and religious traditions from around the world.

The focus areas for this year’s research papers were innovative research methods, music and sound, orthodoxies and race and gender.  These challenging and diverse topics required extensive research which resulted in a positive learning experience for students and thought-provoking presentations for the audience.  All of the student participants presented exceptional work, but it was the work of Morand and Potwardowski that stood out, earning each of them a $500 prize for their outstanding research and presentation efforts.

The School of Theatre, Film & Television faculty was on hand to support the students and emphasize the importance of this valuable educational event.  Assistant Professor Greg Pierotti stated, “I was amazed at the breadth of subject matter and the depth of research presented this year. It left me feeling very proud of these particular scholars and our whole school for providing the rigorous education that we do. A truly amazing event.”

The Undergraduate Research Symposium was made possible by generous gifts to the Theatre Fund for Excellence, the Germaine Tappan Fund for Student Support in Theatre, the Student/Faculty Interaction Grants Program and TFTV Differential Tuition.

About The University of Arizona School of Theatre, Film & Television

The University of Arizona School of Theatre, Film & Television (TFTV) aims to nurture and develop outstanding artists and scholars by providing rigorous training and mentoring by internationally recognized faculty, excellent internship opportunities, industry-standard resources, and hands-on production experience.  TFTV’s comprehensive training aims to prepare students to succeed in a wide range of careers – in the industry, the arts, and higher education. Each year through Arizona Repertory Theatre productions, the Studio Series, and Film & Television screenings, students of TFTV are able to showcase their talents, tell compelling stories, and provide clear results of what happens in their classrooms and studios. The TFTV Theatre Arts program was ranked 33 out of 206 nationwide by College Factual, and Film & Television was ranked #20 among U.S. film schools by The Wrap’s “Top 50 Film Schools,” making UA one of the top places to study theatre and film.