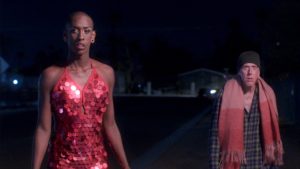 Tucson, AZ (Thursday, 14 April 2022) – The University of Arizona School of Theatre, Film & Television presents the 17th edition of I DREAM IN WIDESCREEN, the annual showcase of senior thesis films made by emerging filmmakers graduating from the School’s nationally ranked Film & Television program. The in-person event returns to its traditional home, the Fox Tucson Theatre, on Saturday, May 7 at 7pm.

“I am so impressed with this year’s crop of films. There’s an incredible diversity of subject matter, yet all the films cut right to the emotional core of the story,” says TFTV faculty Jacob Bricca, ACE. “Whether they come at it with a comedic, dramatic, or absurdist sensibility, they all find a way to bring genuine humanity and pathos to the screen. The actors from our Theatre program also brought their “A” game; they were willing to go to some very vulnerable places and achieved moments of genuine grace and subtlety. The world is starting to notice; this year brought unprecedented recognition to our program and shows the strength of the entire School of Theatre, Film & Television.”

Short films from the last two editions of I Dream in Widescreen have achieved nearly 50 Official Selections by film festivals nationally and internationally, providing invaluable industry exposure for the emerging filmmakers. Highlights include Alexandra Cerna’s TREASURES BENEATH MY TREE, which premiered in 2021 and has since screened at the Los Angeles, Seattle, Brooklyn and Chicago Children’s Film Festivals and is part of a 6-month exhibition at the Center for Creative Photography. Roxanna Denise Stevens Ibarra’s film TESORO has screened at more than a dozen film festivals including the Academy Award-qualifying Urbanworld Film Festival, and the rising filmmaker recently won a fellowship at Edutopia, the educational foundation established by George Lucas. And in a School first, Faye Ruiz’s film THE LIGHTS ARE ON, NO ONE’S HOME was acquired by Dedza Films and Kino Lorber for national distribution.

“Joining the School of Theatre, Film & Television has been one of the best decisions I’ve made,” says Linda Paola Varela, whose sci-fi drama I’M JUST TRYING TO HELP will premiere at this year’s I Dream in Widescreen. “I remember working on a senior thesis film set during my sophomore year and getting to see the film premiere at I Dream in Widescreen. I wondered if I’d ever get an experience like that, and three years later I’m about to see my own film on the same screen! This is the culmination of my undergrad journey, which has been rough at times, especially during the pandemic, but I have found never-ending support from each and every faculty member. I really treasure my relationship with them.”

I Dream in Widescreen will screen in person at the Fox Tucson Theatre (17 W Congress Street Tucson) on Saturday May 7 at 7:00pm. Tickets are $5 general admission and can be purchased at the I Dream in Widescreen website. From May 8 through 15, the program will be available to view online for free at TFTV’s YouTube channel.

About I Dream in Widescreen
I DREAM IN WIDESCREEN is an annual year-end celebration of The University of Arizona School of Theatre, Film & Television student thesis films. Now in its 17th year, films from the graduating class compete for prizes awarded by a panel of noted jurors from a cross-section of the entertainment industry. Films making their premiere at I DREAM IN WIDESCREEN are regularly selected by festivals around the world including Sundance and the Berlinale. I DREAM IN WIDESCREEN 2022 is sponsored by Craig Huston, Film Tucson, Monsoon Production Services, Adobe, Pollution Studios, The Loft Cinema, OWC, Hanson FilmTV Institute, and The University of Arizona Student/Faculty Interaction Grants Program.

About the School of Theatre, Film & Television
The School of Theatre, Film & Television, a member of the Arizona Arts division at the University of Arizona, nurtures and develops outstanding artists and scholars via rigorous training and mentoring by internationally recognized faculty, high-level internship opportunities, industry-standard resources, and hands-on production experience. TFTV offers comprehensive training programs that aim to prepare students to succeed in a wide range of careers – in the industry, the arts, and higher education. Each year through Arizona Repertory Theatre productions, Next Performance Collective productions, and Film & Television screenings, students of TFTV are able to showcase their talents, tell compelling stories, and provide clear results of what happens in their classrooms and studios. TFTV’s Film & Television program regularly ranks in The Wrap’s “Top 50 Film Schools,” and the School’s Theatre programs regularly rank in Onstage’s “Top 30 College Musical Theatre Programs” and “Top 30 College Theatre Design & Tech Programs” making UA one of the country’s top institutions to study theatre, film and television.