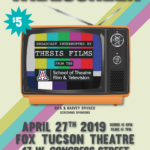 I Dream in Widescreen is a remarkable showcase of original films created by the talented student filmmakers from the UA School of Theatre, Film & Television.  This event is the first major unveiling of the student films before they are taken to film festivals all over the world.

Associate Professor Jacob Bricca proudly acknowledged, “Half of last year’s I Dream in Widescreen films went on to screen at film festivals across the country, including the Austin Music Video Festival (Austin, TX), the End of Days Film Festival (Longwood, FL), the Chandler Intl. Film Festival (Chandler, AZ) and Tucson’s own Loft Fest, but they premiered first at I Dream in Widescreen.  Films from the 2017 show continued their success throughout 2018, with screenings at the Portland Film Festival (Portland, OR), the Brooklyn Women’s Film Festival (NYC), and on broadcast television on KQED Film School Shorts.”

The themes and styles of this year’s films are quite diverse.  From Hannah Sweet’s exploration of a world filled with death and decay in Desert Flesh to Alex Zhao’s story of a student’s battle with a rogue robot in Artificial Incompetence to Aaron Cargile’s mystery of the theft and recovery of a priceless Willem de Kooning painting in Ochre, the films are inspired by the students’ own experiences and creative imagination.  For a complete list of films and filmmakers, please visit IDIWS Films & Filmmakers.

Students compete for awards in nine categories, with cash prizes totaling $1,500 and in-kind awards totaling over $4,000.  The panel of jurors features an impressive group of well-known professionals in the filmmaking industry.  Jurors include filmmakers Allison Anders (Gas Food Lodging) and Tyler Gillett (V/H/S), a 2004 graduate from the School of Theatre, Film & Television program, as well as Katie Walsh, a renowned film critic for the LA Times and Tribune News Service.

For more information about I Dream in Widescreen, visit idiw.tftv.arizona.edu.

I Dream in Widescreen tickets are $5 and seating is general admission.  Tickets can be purchased at tickets.arizona.edu or by calling the College of Fine Arts Box Office at

Monday-Friday from 12-4pm.  Tickets can be purchased on the day of the event at the Fox Tucson Theatre Box Office beginning one hour prior to the event.

The University of Arizona School of Theatre, Film & Television (TFTV) aims to nurture and develop outstanding artists and scholars by providing rigorous training and mentoring by internationally recognized faculty, excellent internship opportunities, industry-standard resources, and hands-on production experience.  TFTV offers comprehensive training programs that aim to prepare students to succeed in a wide range of careers – in the industry, the arts, and higher education. Each year through Arizona Repertory Theatre productions, the Studio Series, and Film & Television screenings, students of TFTV are able to showcase their talents, tell compelling stories, and provide clear results of what happens in their classrooms and studios. The TFTV Film & Television program was ranked #20 among U.S. film schools by The Wrap’s “Top 50 Film Schools,” making UA one of the top places to study theatre and film.