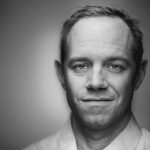 The School of Theatre, Film & Television is proud to present this event as part of the new lecture series for the 2019/2020 season, Day for Night: Conversations on Film & Television.  This exciting new series features renowned TFTV alumni and members of the faculty, who are comprised of internationally recognized filmmakers, producers, and scholars.

In this first installment of the series, audiences are introduced to the complex relationship between documentary films and truth.  Professor Bricca offers an eye-opening lecture with a variety of film clips breaking down the hidden conventions of documentary storytelling and lays them bare.

Jacob Bricca, A.C.E. is an award-winning documentary editor and producer.  He has edited over a dozen feature films including the international theatrical hit Lost In La Mancha, the New Yorker Films theatrical release Con Artist, the Independent Lens Audience Award Winner Jimmy Scott: If You Only Knew and the 2016 Sundance Special Jury Award Winner The Bad Kids. His producing credits include Indies Under Fire: The Battle for the American Bookstore; Pure, which premiered at the 2009 Berlin International Film Festival; and Finding Tatanka which premiered at the 2014 Big Sky Documentary Film Festival. A member of the American Cinema Editors, his first book Documentary Editing: Principles and Practice was published by Focal Press/Routledge in January 2018.

Deconstructing the Documentary: Creating Meaning in Documentary Film is free and open to the public.  Tickets are not required for admission.  The lecture will be immediately followed by a reception.

For more information on this event, visit https://tftv.arizona.edu/events/day-for-night-deconstructing-the-documentary-creating-meaning-in-documentary-film/.

The University of Arizona School of Theatre, Film & Television (TFTV) aims to nurture and develop outstanding artists and scholars by providing rigorous training and mentoring by internationally recognized faculty, excellent internship opportunities, industry-standard resources, and hands-on production experience. TFTV offers comprehensive training programs that aim to prepare students to succeed in a wide range of careers – in the industry, the arts, and higher education. Each year through Arizona Repertory Theatre productions, the Studio Series, and Film & Television screenings, students of TFTV are able to showcase their talents, tell compelling stories, and provide clear results of what happens in their classrooms and studios.  The TFTV Film & Television program was ranked #20 among U.S. film schools by The Wrap’s “Top 50 Film Schools,” making UA one of the top places to study theatre and film.