Above: On the set of A Hunger, written, directed and produced by Anthony Cutrone. A Hunger premiered at I Dream in Widescreen in August 2020. From L-R: Emma Sinex (’20), actor Lance Guzman, Cutrone (’20), cinematographer Gilbert Rataezyk (’16).

October 16, 2020: The Wrap has published its annual ranking of the top 50 Film Schools in the U.S. and The University of Arizona School of Theatre, Film & Television (TFTV) again features prominently at #26. The Wrap is the leading digital news organization covering the business of entertainment and media. The rankings are determined by a poll of more than 2,000 entertainment industry leaders, educators, deans, filmmakers and film commentators, along with experts tasked with evaluating each school. 2020 marks the fourth year in which TFTV has been credited in the highly anticipated rankings.

“We are delighted to again be acknowledged in the latest rankings,” said TFTV Director Andrew Belser. “It means a lot particularly in this unprecedented year, when we have gathered around our students to sustain their learning and careers, including calling on film/tv industry leaders who are alumni to work with and support them. This recognition also affirms our growth in bringing advanced film technology into our school so we can teach toward the new industry standard creative processes. As the world of film and television are also telling more diverse stories, and promoting new layers of inclusion, we are also committed to preparing our students for an increasingly rich cultural world. We are thrilled to be recognized by The Wrap as a rising program amidst a powerful group of film/tv and media schools.”

In a year beset by a pandemic, The Wrap placed a focus on TFTV’s nurturing educators and industry-leading alumni and families. In response to the shutdown, the School’s tight knit community rallied to support the Class of 2020 filmmakers. UA faculty member and filmmaker Lisanne Skyler reached out to a collaborator and alum dad, Emmy-award winning sound mixer Scott Weber, C.A.S. (Westworld, Lost). Synthesizing Zoom and Source Connect, Weber created a virtual mixing platform, connecting UA filmmakers to his Burbank studio, allowing them to professionally complete their films in full 5.1 style for the School’s first online edition of its annual film showcase I Dream in Widescreen — normally a capacity event at the historic Fox Tucson Theatre, and a beloved rite of passage.

When it was announced that I Dream in Widescreen would have to migrate to the School’s YouTube channel, UA alumni luminaries rallied to help create a digital film festival to celebrate their alma mater’s next generation of filmmakers.  During the two-day event, organized by faculty Lisanne Skyler, Beverly Seckinger, the School’s new Advancement Director Kerryn Negus and marketing staff Jordan Lorsung, and kicked off by Netflix’s Head of Original Film Scott Stuber, online audiences listened to conversations with UA alumni about careers, craft and life in a COVID-shaken industry, such as Lindsay Utz, editor of the Academy Award Winning feature doc. American Factory, director Tyler Gillett (Scream 5), Sundance festival programmer Mike Plante, WME partner Brad Slater, casting director Eyde Belasco (Sorry to Bother You, Transparent) and YouTuber Darious Britt.

The School also earned accolades for its continued focus on storytelling. “The School of Theatre, Film, and Television has taught me a lot, mainly about what it really takes to make a good film,” says 2020 graduate Adrian Meyer. “We may not be the biggest school out there, but when you look at the films that have come out of this program in the last 10 years you realize that it doesn’t need to be. A good story and a little savvy go a long way.” 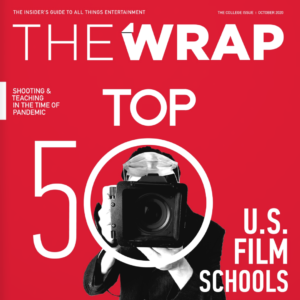 While creating their own films and learning the business, UA School of Theatre, Film & Television students get real-world experience interning on faculty productions and publications such as Skyler’s Brillo Box (3¢ Off) for HBO and Jacob Bricca’s upcoming How Documentaries Work (Oxford University Press), and developing original film and television pitches under the guidance of writer-producer Shane Riches. And UA alumni have led by example in the age of COVID: recently, show runner Sierra Ornelas (Superstore, Brooklyn Nine-Nine and the new Rutherford Falls) created the #Donation4NavajoNationChallenge. Within weeks her campaign delivered over $250k for medical supplies, PPE and other lifesaving essentials to Navajo citizens.

About the UA School of Theatre, Film & Television
The University of Arizona School of Theatre, Film & Television (TFTV) nurtures and develops outstanding artists and scholars via rigorous training and mentoring by internationally recognized faculty, high-level internship opportunities, industry-standard resources, and hands-on production experience. TFTV offers comprehensive training programs that aim to prepare students to succeed in a wide range of careers – in the industry, the arts, and higher education. Each year through Arizona Repertory Theatre productions, the Studio Series, and Film & Television screenings, students of TFTV are able to showcase their talents, tell compelling stories, and provide clear results of what happens in their classrooms and studios. TFTV’s Film & Television program regularly ranks in The Wrap’s “Top 50 Film Schools,” and the School’s Theatre programs regularly rank in Onstage’s “Top 30 College Musical Theatre Programs” and “Top 30 College Theatre Design & Tech Programs” making UA one of the country’s top institutions to study theatre, film and television. More at https://tftv.arizona.edu/