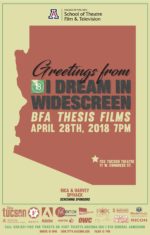 Tucson, Arizona – I Dream in Widescreen returns to Fox Tucson Theatre on Saturday, April 28, 2018 at 7:00pm.  The event showcases BFA Thesis films created by the talented filmmaking students from the University of Arizona School of Theatre, Film & Television.

This annual film presentation and competition is the first opportunity to see the original films from the student filmmakers from the UA Film & Television program before they take their work to major film festivals all over the world.  Students from the program have gone on to present their films at Sundance, the Berlin Film Festival, Palm Springs ShortFest and, most recently, the Culver City Film Festival in Los Angeles, where 2017 graduate Isabelle Smith screened her BFA thesis film Kiss.  The film will also be shown at the Richmond International Film Festival in Virginia later this month.

“We are delighted by the recognition the films are receiving and for the growing industry support of our event,” said Professor Beverly Seckinger. “This year, we are welcoming many great sponsors from the film industry, including new sponsor Adobe and returning sponsors Fancy Film Post, Entertainment Partners, Pollution Studios, Other World Computing, Neil Benton Arts & Entertainment, as well as the UA Hanson Film Institute and the Tucson Film Office. These sponsors are offering wonderful and meaningful awards to celebrate our talented students’ accomplishments and help them continue to make films.”

From Catherine Hilbert’s outrageous comedy Delta Mu Nu to Carolyn McKee’s visually dazzling Snooze to the chilling portrait of a split personality in Alicia Farmer’s James, this year’s thesis films are as varied as they are original. Many are inspired by personal experience. Victoria Pereira called upon her love of music for Syncopate. An avid climber, Cullen Hamblen used his extensive knowledge of Southern Arizona mountain ranges to shoot spectacular sequences for his film Norazia.