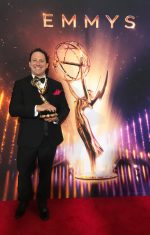 Matter (BA, Media Arts ’01) was part of the Game of Thrones team that won the Emmy for Outstanding Sound Editing for a Comedy or Drama Series; Matter served as the dialogue editor for the series.

After graduating from the University of Arizona in 2001 with a BA in Media Arts, John attended UCLA and earned a Master of Fine Arts in Sound Design for Theater. Following his education at UCLA, John then began working in Post-Production sound editing. He has worked for Todd-AO/Soundelux, Universal, and Formosa Group and has been involved in the creation of hundreds of television episodes including shows like Game of Thrones, The Sopranos, Grimm, Patriot, CSI, and many others. Most recently, John has received two Emmy nominations for Outstanding Sound Editing for a comedy or drama series for his work on Game of Thrones, and won one (2019). He has also received two Golden Reel Awards from the Motion Picture Sound Editors for his work on Game of Thrones.