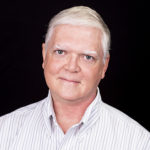 Tom has been the resident Scenic Designer and Artist and part owner of the Gaslight Theatre in Tucson for 39 years. He got a graduate assistantship at Penn State University and received his MFA in Theatre Design in 1983. He has taught Scenic Design at the University of Arizona and at Penn State, designing shows such as NICHOLAS NICKELBY, VERY GOOD EDDIE and THE TROJAN WOMEN. Tom also worked in New York City for three years as a design assistant. He has designed and painted scenery for theatres from Vermont to Florida, and from California to Alaska - including three seasons for the Utah Shakespearean Festival - and was Set Designer on the films POSSE, TOMBSTONE and TANK GIRL. Tom has designed sets for many local Tucson companies, including Invisible Theatre, and has been a frequent guest designer for UA Arizona Repertory Theatre productions, including CRIMES OF THE HEART, TWO GENTLEMEN OF VERONA, THE THREE SISTERS, ROCKY HORROR, THE LITTLE SHOP OF HORRORS, and TITUS ANDONICUS.

Since Leaving the University of Arizona