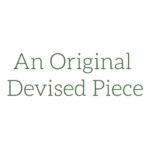 The Studio Series is thrilled to present this new original devised physical theatre piece featuring Wolfe Bowart. Bowart and the BA theatre arts students began collaboration and rehearsal at the start of the Spring semester to develop this new work.  The ensemble, with guidance from Bowart, have been working together to create a fresh theatrical experience for audiences. For this particular theatrical piece, the focus is physical theatre.  The performance piece has evolved throughout the rehearsal process allowing students to learn from Bowart and incorporate their newly learned skills into a truly creative and unique performance.

Bowart shared his insight on this unique teaching and collaboration process. “It often seems counterintuitive to use words to describe a piece of theater that is primarily visual. While collaborating with and directing the UA students in an original work of visual theater I’ve enjoyed watching as we solve the puzzles inherent in translating a theatrical form that is more about muscle than memory.”

Bowart is a successful physical theatre playwright, performer, educator, artist-in-residence and mentor to students aged 4 to 74.  Wolfe Bowart is devoted to creating and presenting theatre productions that engage cross-generational audiences in theatrical experiences that evoke thought, wonder and laughter. Over the past 15 years, Bowart has been invited to tour his original works The Shneedles, LaLaLuna, Letter’s End and The Man the Sea Saw to some 20 countries. Bowart’s latest production Cloud Soup will have an encore performance in Tucson on April 28, 2019 and tour Australia in the Fall. For more information about Bowart, visit https://www.spoontree.com/.

Ticket prices are $7 and can be purchased at tickets.arizona.edu or by calling the College of Fine Arts Box Office at (520) 621-1162 or in person at 1025 N. Olive Road.  Box office hours of operation are Monday-Friday from 12-4pm.  Seating is general admission.