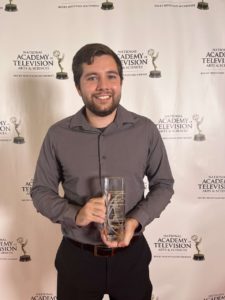 The 2022 National Academy of Television Arts & Sciences Student Production Awards took place this weekend. School of Theatre, Film & Television senior Brett Jones (BFA, Film & Television ’23) won in the category of Non-Fiction Short Form for his doc Something to Fear. This marks a first-time SPA win for the University of Arizona.

TFTV was well represented at the awards. Sasha Reist (BA Film & Television ’23, BFA Dance ’23, and Minor in Chinese) earned a nomination in the same category for the film Changement. Rene Marcelle earned a nomination in the category of College Music Video for This Galaxy Ain’t Big Enough. The music video stars Alex Simpson (BFA Acting, ’23) and Jackson Huffman (BFA Film & Television ’24) and was choreographed by Robbie Voigt (BA Theatre Studies, ’22) and Alex Simpson, both of whom were students in Professor Brent Gibbs‘ Advanced combat class last year.

These awards are in part the result of the work of TFTV’s festival/awards campaign office, led by Kerryn Negus. In addition to the 2022 SPA nominations and award, the last two years have seen films created by TFTV filmmakers selected for more than 50 film festivals, including the Academy Award-qualifiers Palm Springs International ShortFest, Chicago International Children’s Film Festival, Leeds International Film Festival, and New York’s Urbanworld Film Festival. Industry recognition propels the visibility of TFTV’s emerging filmmakers and helps create a crucial bridge into the industry.

“I’m extremely grateful to NATAS Rocky Mountain Southwest Emmys for this recognition, and I’m incredibly grateful to Kennedy Brown for allowing me to tell a piece of her story,” says Brett. “I feel this award is a reflection of the phenomenal film program we have at UArizona. I’d especially like to thank Professor Bricca for his tremendous support, and Kerryn Negus for her dedication to earning our films recognition like the one we received. I’d also like to thank Jenelle Velazquez for her immense support and assistance with producing the film, and all of my documentary production classmates for their advice and friendship along the way.”