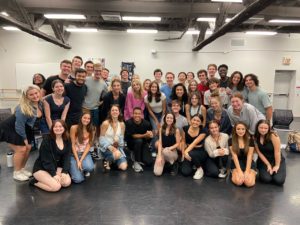 Taylor Pearlstein (BFA Musical Theatre, ’17) returned to the UArizona campus this week as part of the company performing SIX the Musical at Centennial Hall. The Tucson performances are part of an extensive North American tour of the multiple award-winning Broadway musical, a comedic re-telling of the lives of the six wives of Henry VIII. The tour debuted in September 2022 in Las Vegas and Taylor will be on the road through August 2023, touching down in some 35 venues along the way.

On Wednesday, Taylor stopped by for an informative Q&A and talkback with current Acting/Musical Theatre students. Earlier, she paid tribute to the School of Theatre, Film & Television and the faculty who mentored her.

“Looking back, I really needed to be at the University of Arizona. I needed to be in a Musical Theatre program that was a little smaller in size. It allowed me to have an incredible range of experiences onstage that I wouldn’t have gotten at other programs. It gave me the confidence that I don’t think I would have gained at larger schools,” says Taylor. 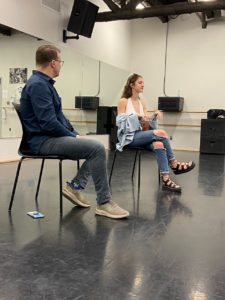 “[The late] Monte Ralstin was a pillar for everyone who got to work and train with him. I admired his spirit, how much he loved what he did and how much he loved theatre. I carry that with me. Even now when I host masterclasses, everything that I say is so Monte. The careers of Hank Stratton and Danny Gurwin aligned with my dreams. Both were incredible support systems. They saw a lot in me that I may not have seen in myself. Brent Gibbs’ stage combat class was one of my favorite experiences from the program. Kevin Black was my first acting teacher in my freshman year. I learned so much from him. From David Morden I learned all my physicality.”

After graduating, Taylor moved to New York where she says she was grateful for the support system provided by a community of friends and UA alumni. “The network was so important,” she says.

The journey that led Taylor to joining the company of SIX began in early 2020, when her agency emailed her with a self-tape audition request. After various delays through the pandemic, she made it to final callbacks in Spring 2022. When she received the offer to join as one of four alternates on the Boleyn tour, Taylor was overjoyed. “I really wanted it. I’d had voice lessons every week. I worked so hard. I feel like I earned this. And I couldn’t be happier to join this company. The people on the show are the right fit for me.”

SIX the Musical, the Boleyn Tour, is onstage at Centennial Hall through Sunday October 16. More information is available at taypearlstein.com and sixonbroadway.com.