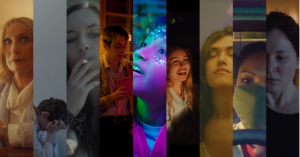 TUCSON, AZ (September 22, 2021) – Films from the 2021 and 2020 editions of I Dream in Widescreen, the showcase of senior thesis films made by emerging filmmakers at the University of Arizona School of Theatre, Film & Television (TFTV), continue to generate major festival buzz. Official selections now total 27. Here are some of the latest highlights.

TESORO selected for Young Creators Showcase at Urbanworld Film Festival in NYC
Inspired by the stories from her own Mexican-American family, Roxanna Denise Stevens Ibarra’s poignant film Tesoro has been selected by 10 film festivals around the country. Later this month, Tesoro will screen in New York at the 25th annual Urbanworld Film Festival. Presented by founding partner HBO and partners WarnerMedia and Ally, Urbanworld is dedicated to advancing the impact of diverse content creators. Roxanna’s film is one of seven shorts selected for the Young Creators Showcase, screening both virtually and in person at Cinépolis Cinemas Chelsea on September 30.

“Having Tesoro – a film created with family and our small Chicano community in Tucson – being screened as part of the Young Creators Showcase in NYC, at the largest Academy Award-qualifying film festival in the world, is magical. I just want to make my family proud and continue to make art, and I’m so grateful that UrbanWorld is providing a space to do that,” says Roxanna.

The Urbanworld Film Festival will take place in New York from September 29 – October 3, 2021.

FALLACY to screen at Seattle Queer and San Francisco Transgender Film Festivals
Atlas Woods-Smith’s film Fallacy, about a trans man working through his insecurities as he pursues the man of his dreams, will screen at the Seattle Queer Film Festival in October 2021 and at the San Francisco Transgender Film Festival (SFTFF) in November 2021. Seattle Queer has grown into the largest event of its kind in the Pacific Northwest, gaining industry and audience recognition for showcasing the latest and best in queer film, from major motion picture premieres to emerging talent. Established in 1997, SFTFF exhibits courageous, moving and innovative works that show the complexity of lives lived on the transgender spectrum.

“I’m so honored to have this story shown at these festivals,” says Atlas. “My purpose in making this film was to showcase the experience of living in the intersection of trans and gay identities, and I’m hoping there are audience members who will finally feel seen by watching it.”

TREASURES BENEATH MY TREE to screen at Chicago International Children’s Film Festival
In November 2021, Alexandra Cerna’s film Treasures Beneath My Tree will screen at the 38th annual Chicago International Children’s Film Festival (CICFF). CICFF was founded with the aim to introduce culturally diverse films to American children, and is now one of the two Academy Award-qualifying children’s film festivals in the world. Alexandra grew up in Scottsdale AZ and spent her summers in the tiny mountain town of Concepción de Buenos Aires in Jalisco, the home of her father’s family. Treasures Beneath My Tree honors the beloved ‘patches of nature’ she knew growing up – both the lone tree in her front yard in the Arizonan desert, and the lush green of her Mexican pueblo – and the power of staying connected to nature, and to our younger selves.

“All my favorite films are children’s movies,” says Alexandra. “To be in the same festival that has hosted some of my childhood favorites is truly incredible! My film is centered around creativity, thinking outside of the box and the simplicity of a child’s happiness. This festival embodies the exact morals of my film. I couldn’t be more honored!”

International Black Film Festival selects ONE-WAY MIRROR
Sparked by the turmoil following the death of George Floyd, One-Way Mirror tackles the topic of white liberals not understanding their own privilege. In a review for Arizona Spotlight, Chris Dashiell said that it “handles a thorny subject with grace and nuance, and is thought-provoking without being pedantic.” The film was co-written by Mackenzie Giguere and Vaune Suitt, marking the first time a senior thesis film was written jointly by a Film & Television student and an Acting/Musical Theatre student respectively. Vaune also stars in the film alongside fellow Acting/Musical Theatre students Reagan Kennedy, Brach Drew, and Babacar Ba. The film will screen at the International Black Film Festival, taking place in Nashville, TN from December 2 – 5, 2021.

“Having One-Way Mirror selected for the International Black Film Festival means the world to me,” says Vaune. “As a black girl from Arizona, getting to share a story with personal meaning was not something I knew I could do, or had the ability to. Working with Mackenzie to create this movie brought life to some of my experiences, and I am so grateful.”

Mackenzie Giguere: “This is our first festival acceptance, and it is such an honor to have been selected. One Way Mirror would not have been possible without the dedication of our crew, the support of our friends and family, or the vulnerability and skill Vaune brought to the project. I’m incredibly proud and grateful!”

Following the official festival selections announced in a story in May, the latest list of selected films from the Film & Television Classes of 2020 and 2021 include:

The Lights Are On, No One’s Home | directed by Faye Ruiz (’20) | Palm Springs International ShortFest

The Lights Are On, No One’s Home | directed by Faye Ruiz (’20) | Long Distance Film Festival

The University of Arizona School of Theatre, Film & Television (TFTV) nurtures and develops outstanding artists and scholars via rigorous training and mentoring by internationally recognized faculty, high-level internship opportunities, industry-standard resources, and hands-on production experience. TFTV offers comprehensive training programs that aim to prepare students to succeed in a wide range of careers – in the industry, the arts, and higher education. Each year through Arizona Repertory Theatre productions, Next Performance Collective productions, and Film & Television screenings, students of TFTV are able to showcase their talents, tell compelling stories, and provide clear results of what happens in their classrooms and studios. TFTV’s Film & Television program regularly ranks in The Wrap’s “Top 50 Film Schools,” and the School’s Theatre programs regularly rank in Onstage’s “Top 30 College Musical Theatre Programs” and “Top 30 College Theatre Design & Tech Programs” making UA one of the country’s top institutions to study theatre, film and television. More at tftv.arizona.edu.

It's the FINAL WEEKEND to experience INTO THE WOODS!

Tickets are available at am.ticketmaster.com/uacfa/intothewoodstftv.

The 2021 LOFT FILM FEST lineup has just been announced and TFTV is well represented! The festival will screen two recent senior thesis films, a new short by a faculty member, and a punk rock documentary by an alum!

On Thursday, November 11, watch HOUSES IN MOTION by Adrian Meyer ('20) in the Fiction Shorts section. On November 12, check out the Late-Night Shorts section for LUCID DREAMERS by Matthew Potwardowski ('21) and A DUTIFUL SPOUSE, the spine-chilling new film by Assoc. Professor Michael Mulcahy. Finally, on November 15, Mike Plante's ('94) documentary film WE WERE THERE TO BE THERE will screen in the Documentary Shorts category.

The School of Theatre, Film & Television is proud to be a sponsor of the 2021 Loft Film Festival and we can't wait to see these films on the big screen at Tucson's most beloved cinema. Find out more at loftfilmfest.org/. ... See MoreSee Less

The film, a gripping documentary that follows two families searching for their missing loved ones near the U.S.-Mexico border in Texas, is co-directed by Jeff Bemiss and TFTV adjunct instructor Lisa Molomot, and produced and edited by Associate Professor Jacob Bricca, ACE.

DAUGHTER OF EVE, the short documentary by Linda Paola Varela (BFA Film & Television '22), has been officially selected to screen at the Festival Fotogenia in Mexico City in November, marking the 30th festival selection of films made by students at UA School of Theatre, Film & Television in the past year. CONGRATULATIONS Linda!

Daughter of Eve combines archival photography, projection work, poetry, movement, and music in an exploration of the societal sexualization of women and girls and how it has impacted the filmmaker's own relationship with religion.

"I am honored to have been selected for Festival Fotogenia 2021," says Varela. "As a Mexican woman, it means a lot to me that my first international film festival selection is for a festival in Mexico City, and especially a festival that honors work of a poetic, expressive, and experimental nature."

The live in-person table read will feature an all-star cast of students and local professionals.

Join us for the World Premiere of HELP WANTED, an original network-style comedy pilot created by @uatheatrefilmtv students – the culmination of a Sitcom Boot Camp guided by award-winning director Brian Levant (Happy Days, Mork & Mindy, Beethoven, The Spy Next Door).

The live in-person table read will feature an all-star cast of students and local professionals.