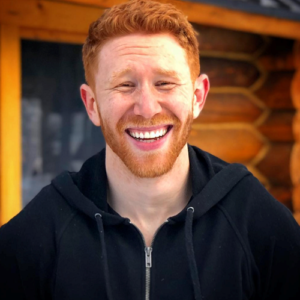 Wigham Foothill, better known to his friends as Josh Durst-Weisman (BFA, 2012), was named the Grand Prize Winner of the 2020-21 Fresh Voices Screenplay Competition for his 1 hr TV Pilot, PONZI, the first TV Pilot to be Awarded the honor in Fresh Voices’ twelve-year history. The script was selected from over 1,300 entries.

Based on a true story and set in 1920 Boston, Ponzi tells the story of an out of work publicist who gets the job of a lifetime to be the right-hand man for “financial wizard”, Charles Ponzi. Think Billions meets Catch Me If You Can, it’s period set, yet written in a highly contemporary style with a timely cautionary tale.

In addition to receiving the Grand Prize Award, the script also won multiple Spotlight Awards for Best Dialogue and Best First Ten Pages. Upon receiving the $3,000 grand prize, Josh joked, “I adopted my pen name Wigham Foothill on a dare from my wife. She’s laughing at me now and I’ll probably have to keep it to prove my masculinity to her somehow! — To be honest, I had always viewed Fresh Voices to be out of my league, primarily because so many mentors and writer friends refer to it as one of the more writer-focused competitions in the industry. To see Ponzi selected as the first TV pilot to ever win the Grand Prize is just a massive honor. Big thanks to Fresh Voices for running a killer competition, and for all you’ve done for the writer community over the years.”

Presiding over the competition, Chairman Joel Mendoza remarked, “This is not only a great piece of writing, it’s a great piece to write. It really shows that Josh has his finger on the pulse and a highly commercial sensibility. The pilot exhibits wonderfully rich characters, engaging dialogue and a high-concept story that will resonate with a broad audience. Josh and his script perfectly embodies our ethos at Fresh Voices of discovering and promoting new voice’s that must be heard and stories that must be told and we are very proud to have found this gem. This script was a pure joy. From the first few pages you are immediately thrust into the world of this criminal mastermind and his unique confidence games from a young age. You feel perfectly at ease in Josh’s capable hands as the story jumps back and forth in time illuminating Ponzi’s skill and legacy. This is not only a superbly crafted piece of writing, but one highly deserving of all the recognition it receives.”

Fresh Voices Screenplay Competition was founded in 2009 with the mission of discover and nurturing new screenwriting talent. In its 12-year history, Fresh Voices has introduced hundreds of new writers to the industry and seen many of their alumni go onto illustrious screenwriting careers, signing with representation, being hired for writing assignments, and even seeing their work produced.