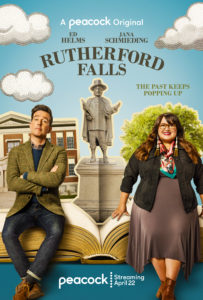 The brand-new Peacock Original comedy series Rutherford Falls is set to premiere this week on Thursday, April 22, 2021. The comedy about two lifelong best friends, Nathan Rutherford (Ed Helms) and Reagan Wells (Jana Schmieding), who find themselves at a crossroads – quite literally – when their sleepy town gets an unexpected wakeup call, is the latest show from Sierra Teller Ornelas.

Sierra Teller Ornelas, co-creator, showrunner, writer, and executive producer of Rutherford Falls graduated in 2005 with a BA from the University of Arizona School of Theatre, Film & Television. After working as a writer and showrunner for NBC shows like Superstore and Brooklyn Nine-Nine, and signing a multi-year producing deal with Universal Television, Rutherford Falls is expanding her relationship with the studio and making history along the way.

“I’m never excited to say there has never been a major television series that presents a variety of Native characters, and certainly not ones depicted as complex, funny, and just regular ass people. But I’m incredibly proud to be the co-creator (alongside two comic geniuses, Mike Schur and Ed Helms) and Showrunner of the upcoming comedy Rutherford Falls,” Ornelas reflects on the show and the state of representation in the industry. “We made a Native Sitcom where the Native folks are in on the joke. To be clear, Native people have been hilarious for centuries, we are the first storytellers, the original storytellers; and our show is, for me, just a continuation of that tradition. But now everyone gets to see how awesome we are. The show features a cracker jack writing staff, which includes four other Native American writers, each offering their own unique, hilarious points of view. One of the themes of our show is to ask audiences to consider what the phrase “American History” really means, and who gets included in that history. By shining a light on fresh, exciting Native voices, both onscreen and behind the camera, it gives me great joy to think that Rutherford Falls might help foster such conversations. Also it’s super funny. I really hope you enjoy our show.”

Watch the trailer for Rutherford Falls