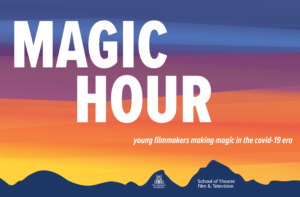 TUCSON, AZ [May 27 2020] – The School of Theatre, Film & Television will present a special edition of Magic Hour, the annual screening of short fiction films made by students in the Fiction Production class. The event, which normally takes place at the end of semester at the Loft Cinema, will instead premiere online at magichour.tftv.arizona.edu. The site will go live from Wednesday May 27 at 5:00pm.

This year, most students were poised to commence filming when campus closed due to the global pandemic. While the closure prevented many of the students from undertaking the films they had originally planned, they pivoted to creating films and film projects from the confines of their homes, using resources at hand.

TFTV Associate Professor Michael Mulcahy elaborates: “The films which screen during Magic Hour normally begin as ideas, make their way to paper, and eventually are brought to life by talented cast and crew. This semester-long process was disrupted, along with everything else, by the coronavirus. In the face of that disruption, the filmmakers in class persevered. The work that resulted – short films, storyboards, scripts for future films and in one case, the transformation of a live action film into an animated film – is moving, thoughtful, funny, scary and intriguing. Throughout, the filmmakers showed resilience and determination. The last eight weeks are among the most intense and rewarding moments in my teaching career, and I thank each student for the opportunity to be part of their education.”

Filmmaking student Kirstyn Kubicki: “Right before spring break, we were really excited to shoot our film, as we had just cast our actors and the production design of our film was starting to bring it to life. While it does make me sad that we never got to film our original script, I am grateful for this semester and everything I learned both in and outside of the classroom. I admire Professor Mulcahy for how well he was able to not only redirect this class, but for how much he cared about his students during this unknown and challenging time. While this isn’t the Magic Hour we were hoping for, I think it is pretty special.”

About the School of Theatre, Film & Television
The University of Arizona School of Theatre, Film & Television (TFTV) aims to nurture and develop outstanding artists and scholars by providing rigorous training and mentoring by internationally recognized faculty, excellent internship opportunities, industry-standard resources, and hands-on production experience. TFTV offers comprehensive training programs that aim to prepare students to succeed in a wide range of careers – in the industry, the arts, and higher education. Each year through Arizona Repertory Theatre productions, the Studio Series, and Film & Television screenings, students of TFTV are able to showcase their talents, tell compelling stories, and provide clear results of what happens in their classrooms and studios. The TFTV Film & Television program was ranked #25 among U.S. film schools by The Wrap’s “Top 50 Film Schools,” and the School’s Theatre programs regularly rank in Onstage’s “Top 30 College Musical Theatre Programs” and “Top 30 College Theatre Design & Tech Programs,” making UA one of the top places to study theatre and film.