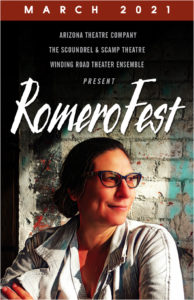 RomeroFest, a month-long international festival celebrating the diverse and impactful works of playwright and School of Theatre, Film & Television Associate Professor Elaine Romero, will premiere as a series of digital performances by theatre companies across the U.S. and in Mexico in March. The festival is a collaboration between Arizona Theatre Company, the Scoundrel & Scamp Theatre, and Winding Road Theater Ensemble.

As part of the festival, TFTV will join Winding Road Theater Ensemble and the Scoundrel & Scamp Theatre to present readings of each of the three plays in Romero’s U.S./Mexican Border Trilogy. Sean Daniels will direct Wetback, the first in the trilogy presented on March 15 by Winding Road. On March 17, TFTV students will present a reading of Mother of Exiles, the second play in the trilogy. The production will be directed by TFTV Instructor Claire Mannle and presented on Zoom. On March 20, the Scoundrel & Scamp Theatre will present Title IX, the third in the series, with Eva Tessler directing.

Elaine Romero: “Each of the Border Trilogy plays deals with a social issue. After Sandy Hook happened, I started to hear about this proposal that schools in Arizona arm teachers. With guns in classrooms, I started thinking about all that could go wrong, how someone with good intent could become a perpetrator. Each of the plays from this trilogy features a Latina educator at their center” Romero says of her Border Trilogy works. “I’m interested in flawed people, people who can’t live up to their highest ideals. Magda, the teacher at the heart of Mother of Exiles doesn’t see her own overconfidence (she knows how to use a gun properly, she thinks). She doesn’t see her own classism and elitism. Most of all, she doesn’t know that with enough pressure from the outside, anyone can explode from the inside.”

“Elaine and I have been fans of each other’s work since we became colleagues in 2015” reflects director Claire Mannle. “We have been trying to find a chance to work together and I am thrilled to a be a part of the international celebration of her voice. Mother of Exiles, the pulsing heart of the Border trilogy, is an intersection of many American questions at once: how do we balance freedom and safety, privilege and responsibility, identity and possibility? The play offers multiple challenging roles for our students to explore in a contemporary and local context. Elaine has also created non-realistic moments that I think have the potential to be evocative in a Zoom reading.”

The Festival opens on March 1 at 5:00pm with a digital “Scholar Kickoff” featuring a town hall-type panel discussion about Elaine’s work and its impact. A full list of plays to be presented and schedules will be announced in February and will be available at www.arizonatheatre.org.