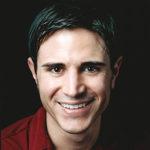 Ricky left his Wyoming birthplace to get his Acting BFA from the University of Arizona back in 2002. He traveled the country before finding home in Seattle, Washington, where he acted with Book-It Repertory Theatre, Washington Ensemble Theatre, Sound Theater Company, Wooden O, ArtsWest, and many more. He was also an active ensemble member of Pony World Theatre and theater simple. In recent years, Ricky's love for devised work pushed him to the road, and he now makes his living touring the globe with his partner Sadie, performing their original plays. Ricky's original works include TESLA EX MACHINA (a solo biography of the inventor), Calculus: the Musical! (new version adapted with Sadie Bowman and Marc Gutman), Roberta and the Moon (from a love story written by his father), and his one-man zombie trilogy, A Zombie Odyssey, Ides of Undead March, and Against a Risen Son. To follow Ricky’s journeys, visit rickycoates.com and matheatre.com. Ricky is eternally grateful to the Arizona Repertory Theatre for giving him the basis to make his dreams come true.