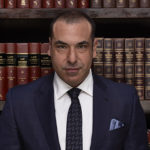 Rick Hoffman stars as Louis Litt in USA’s provocative drama, SUITS. A stage, film and television veteran, Hoffman has appeared in feature films such as HOSTEL, and HOSTEL PART 2, directed by Eli Roth; BLOODWORK, where he starred opposite and was directed by Clint Eastwood; and SMILEYFACE, where he starred opposite Anna Faris, Adam Brody and Danny Masterson. His other film credits include, CELLULAR, THE DAY AFTER TOMORROW, CONSPIRACY THEORY and THE CONDEMNED. Named by Variety in 2000 as one of the “10 Actors to Watch,” Hoffman has had a number of noteworthy roles on television, such as Chase Chapman opposite Christina Applegate on the award-winning SAMANTHA WHO?, Patrick Van Dorn opposite John Stamos on JAKE IN PROGRESS, Freddy Sacker on Darren Star’s THE STREET, Jerry Best in THE BERNIE MAC SHOW and Terry Loomis in the critically acclaimed Stephen Bochco drama, PHILLY. He also recurred on DARK BLUE and COMMANDER IN CHIEF. His numerous guest star credits include LAW & ORDER: SVU, MONK, WITHOUT A TRACE, LEVERAGE, LIE TO ME and HUMAN TARGET. Hoffman studied acting at John Strasberg School of Acting and the University of Arizona Theatre Department.