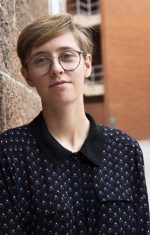 Amanda Coote will be recognized at the 2019 College of Fine Arts’ 2019 Fall Graduation Convocation on Dec. 19 as the College’s ‘Outstanding Senior.’

Amanda is graduating with double degree: A Bachelor of Arts in Film and Television from the School of Theatre, Film & Television and a degree in Creative Writing from the College of Social and Behavioral Sciences.

In addition, she was a four-year member of the Pride of Arizona Marching Band, playing her piccolo at such iconic locations as Disneyland, Los Angeles Coliseum (USC), State Farm Stadium (Arizona Cardinals), and Levi’s Stadium (San Francisco 49ers).

She is also a member of the Sigma Colony of Delta Kappa Alpha, a professional cinematic fraternity, where she has served as head of the screenwriter’s circle. She has a passion for writing, particularly novels and various media platforms. After graduation, she hopes to move to LA to work in video game pre-production and continue to write novels.