During this event, host Giovanna Parmigiani will talk with Prof. Cristiana Giordano (UC Davis) and Pierotti about their innovative methodology, Affect Theater, and how it can transform academic research. They will discuss the role of affects, emotions, and collaborative practices in academic and non-academic processes of meaning-making. 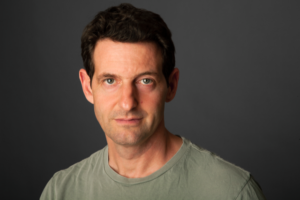 Previously, Pierotti (pictured) co-authored The Laramie Project (2000), Laramie: 10 Years Later (2008) and The People’s Temple (2004), which have garnered Humanitas, Bay Area Theater Critics awards and an Emmy nomination. He has co-authored The Moment Work Book (2018) with Members of Tectonic Theater Project. His research investigates dramaturgical practices that deal with problems of narrative and truth claims in theater of the real.

Together, Giordano and Pierotti have been collaborating on a new methodology, Affect Theater, at the intersection of the social sciences and performance. They have created Unstories and Unstories II (roaming), two 50-minute performances around the current “refugee crisis” in Europe. They are currently completing a book on their collaborative practice.

Learn more or register for the event here.