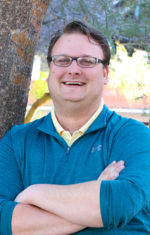 The stage is often the first thing the audience sees when they step foot into a theatre, and it’s also one of the most important elements in every show. The scenery, the props, the overall design, all of it is used as the initial tool to transport the audience into the world that they will be immersed in for the next hour or so of their lives – and the creation and representation of the scenic design is crucial.

The design of such theatrical portals into these imaginative worlds rests carefully in the hands of the show’s scenic designer. Whether they’re diving under the sea for Disney’s The Little Mermaid, or jumping into the fantastical world of a character’s imagination, such as that of Edward Bloom in Big Fish, scenic designers must have a diverse skill set that’s as versatile as the imagination itself.

Joe Klug is one such talented designer who has brought four shows to life on Orlando REP’s stages throughout the past three seasons. Previously named as one of Live Design Magazine’s “30 under 30” scenic designers, Joe is back in Orlando helping bring the larger-than-life musical Big Fish, to life with Orlando REP’s Youth Academy.