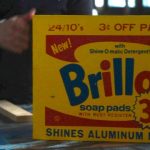 “Brillo Box (3¢ Off),” Lisanne Skyler’s Oscar-shortlisted documentary film, which debuted on HBO in August 2017, is available for viewing again on all HBO platforms.

Skyler is an award-winning writer/director of scripted, documentary and short films that have screened at Sundance, South x Southwest and the Venice Film Festival, and aired on PBS, Sundance Channel, and HBO. And she is also a University of Arizona School of Theatre, Film & Television professor.

“Brillo Box (3¢ Off),” an official selection of the 54th New York Film Festival, follows an Andy Warhol sculpture from Skyler’s New York family’s living room to a record-breaking Christie’s auction. The sculpture was purchased by Skyler’s father for $1,000 and sold years later at auction for $3 million. The film describes a personal and Pop Art journey and explores the ephemeral nature of art and value.

On the occasion of the re-release of her film, we decided to ask Skyler for her favorite art documentaries and why. What makes a documentary or any film special? Skyler says finding that human element that makes the film relatable is key. So here we go … in no particular order.