The University of Arizona School of Theatre, Film & Television (TFTV) is excited to kick off the 2022/23 Theatre Season with Legally Blonde the Musical. A lighthearted and award-winning musical based on the much-adored movie of the same name, Legally Blonde the Musical follows the transformation of Elle Woods as she tackles stereotypes and scandal in pursuit of her dreams. Hilarious, heartwarming, and exploding with memorable songs and dynamic dances.

We asked costume designer Lindsay McDonald about the design process for the show:

What was your inspiration for the costume design for Legally Blonde?

I was really struck by Elle’s ability to elevate and inspire those around her. She truly sees the truth in everyone and inspires them to be their best selves. I wanted this show’s costumes to be fun, upbeat, colorful, and to really tell the story of the characters finding their way. The show sits solidly in the early 2000s, so for the California sorority girls there was a lot of inspiration from the celebrities of that time–think Paris Hilton and Lindsay Lohan. I wanted it to be frothy, sweet and fun so I chose a sort of “rainbow sherbet” palette. I wanted to make sure that there was a stark contrast with the East Coast Harvard folks, and that Elle looks much like a fish out of water there. The Harvard students exude an”old money” vibe, with a much more subdued color palette. I had so much fun playing around with all the preppy looks from this world!

What are the benefits or challenges of designing for a production with such well-known counterparts?

Both the movie AND the show are so well known! There are some expectations that the audience already has going into it, so the challenge has been trying to stay true to my own design instincts while trying to honor those expectations.

What has been your favorite part of designing Legally Blonde?

I have been able to tap into my inner ten-year-old with all of the pink, glitter, and sparkle! I’m really going for it!

Do you have a favorite costume?

I’m in love with this little pink Chanel-style suit that Professor Rick Tuckett is building for me. He’s a master, and Elle’s going to look amazing in it.

What has been the most challenging part of designing costumes for this production?

The sheer size of the show! There are so many characters–some of the ensemble actors play eight or nine roles and need to change from one to the next in mere seconds. So many costumes!

Any other thoughts about the process, the production, collaboration, etc that you would like to provide we would love to hear about!

Our shop is hard at work and things are starting to come together. This show has such great energy and it’s trickled into all areas of the shops. No one can be too serious when surrounded by pink sequins! 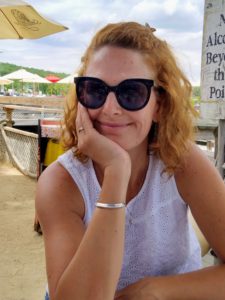 Lindsay McDonald is a third year MFA student in Costume Design. Most recently, she designed costumes for Heathers at Arizona Theatre Company’s Summer On Stage, and Three Sisters and A Simple Herstory at Arizona Repertory Theatre. She earned her BA in Theater Arts at The University of New Hampshire, during which she designed costumes for Hackmatack Summer Theatre and Lakes Region Summer Theatre. She worked in the costume shops of the Old Globe Theatre in San Diego, Center Theater Group and The Los Angeles Opera, and was part of the construction team for the costumes and puppets for the opening and closing ceremonies of the Salt Lake City Olympics.

Want to see these costumes for yourself? Legally Blonde will run from Oct. 2 – 16, 2022 in the Marroney Theatre. Tickets are available at tickets.arizona.edu. 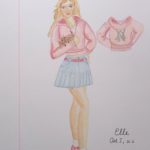 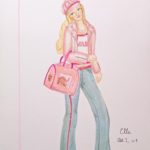 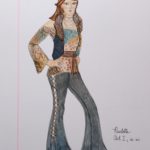