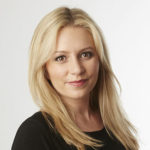 Kendall oversees social media and digital brand strategy at United Talent Agency. She advises clients across the agency’s numerous departments on how to define their brand in the online space, as well as leverage their voice to market their projects. Her clients include traditional stars, digital influencers, corporations and media companies from across the agency’s film, TV, music, alternative and news divisions. She has spearheaded new initiatives and partnerships, including co-developing SnapperHero, the first scripted series on Snapchat, which was nominated for six Streamy awards in 2015. Her work has been recognized by the Forbes 30 Under 30 list to AdAge’s 40 under 40 list. She is a leader in the online space, and is consistently referenced for the latest innovations in technology in order to leverage her clients. Before UTA, Kendall launched and managed the social media presence for the Ellen DeGeneres Show. Her work earned her a daytime Emmy nomination in 2011 for “New Approaches – Daytime Entertainment.” Kendall also worked at ID PR overseeing digital strategy for their celebrity, corporate, startup and nonprofit clients. Her innovative campaigns have been featured across media outlets including Fast Company, Forbes, AdWeek, AdAge, BuzzFeed and TechCrunch. She was also part of the NBC Page program.