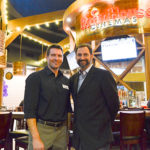 Jeff Brack (left in photo) and Josh Snider (BS 1996 Civil Engineering, right in photo) have been best friends since they were neighbors as children. They were roommates and inseparable buds while attending the University of Arizona. Over the past 20 years, Josh built a successful career as an engineer, and Jeff worked in film and television followed by a 15-year career in the tennis industry. However, their love of cinema beckoned, and in 2014, along with three additional partners, they launched Tucson’s first dine-in theater experience, RoadHouse Cinemas. Jeff is the Production & Content Manager at RoadHouse Cinemas while Josh is the Owner and Manager of Business Expansion. It has been an overwhelming success, leading to the recent grand opening of a new theater in Scottsdale, and further exploration of new locations in Tucson and beyond!

The Brooklyn SciFi Film Festival opened this week and IRIS, the short film by Zach Lovvorn ('20) features in the Live Action Short Film category! Watch it and all films at the festival online, for free!

Congratulations Zach! We're so excited for IRIS, one of the many films that premiered at the 2020 and 2021 editions of I Dream in Widescreen now generating major festival attention. This year, films by rising TFTV filmmakers have earned an unprecedented 27 Official Selections. Read more about the festival buzz at:
tftv.arizona.edu/news/tftv-filmmakers-earn-unprecedented-number-of-film-festival-selections/ ... See MoreSee Less

TESORO is one of seven short films in Urbanworld's Young Creators Showcase, screening both virtually and in person at Cinépolis Cinemas Chelsea on September 30.

“Having TESORO - a film created with family and our small Chicano community in Tucson - being screened as part of the Young Creators Showcase in NYC, at the largest Academy Award-qualifying film festival in the world, is magical. I just want to make my family proud and continue to make art, and I’m so grateful that UrbanWorld is providing a space to do that,” says Roxanna.

Above: a behind-the-scenes images of Roxanna flanked by her sisters Raquelle and Rebecca who acted as extras in the film, and with co-star Victor Garcia Rodríguez. Roxanna graduated from UA School of Theatre, Film & Television with a BFA in Film & Television in 2020 and will soon complete her BM in Music Education from The University of Arizona Fred Fox School of Music. From all of us at TFTV, congratulations Roxy!

TOMORROW 📽✨
Join us in person for Magic Hour, a free screening of nine short fiction films made by students in the University of Arizona's School of Theatre, Film & Television Spring 2021 Fiction Production class! Each of the two screenings at The Loft Cinema will be followed by a short Q&A with the filmmakers moderated by Jeff Yanc.

Sept. 21 at The Loft Cinema
Screening twice: 6pm + 9pm
FREE and open to the public!

It’s Emmy season, and this weekend at the Creative Arts Emmys we'll be on the lookout for TFTV alum John Matter (’01)! John is nominated in the category of Outstanding Sound Editing for a Comedy or Drama for his work as Dialogue Editor on HBO’s Lovecraft Country.

"It is such an honor to have a third Emmy nomination! After working so hard on 'Lovecraft Country' during such a difficult year - with the whole family locked down at home doing remote school and work - to have my work recognized and nominated again feels like such a huge achievement! I also feel incredibly fortunate to have been able to work on such an important project with such awesome and talented people," says John.

This third nomination follows John's 2019 Emmy win for Outstanding Sound Editing for a Comedy or Drama Series for his work on 'Game of Thrones'.

Last weekend, University of Arizona: Acting/Musical Theatre sophomores Brach Drew, Lillie Langston, Sophia Scarsi, and John Henry Stamper traveled to Las Vegas to perform during the Wildcat Vegas Takeover! The 3-day event marked the opening of the official football season ahead of the first game at Allegiant Stadium. Our A/MT students sang a collection of musical hits curated by faculty Hank Stratton, Danny Gurwin, and Jamie Reed at the Bear Down Tailgate at the Mandalay Bay Resort and Casino. ... See MoreSee Less

Want to be in a senior thesis film? You’re invited to the annual Cast + Crew Mixer where filmmakers from the Film & Television program will present pitches for their senior thesis films, in hopes of attracting actors, composers, designers, technicians and all interested students to be part of their productions.