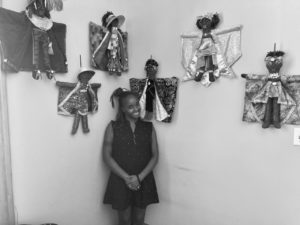 School of Theatre, Film & Television MFA candidate in Design and Technology Ivy Wahome and her show Gilded in Black were recently profiled on AZPM’s Arizona Illustrated.

Gilded in Black shows a version of the Victorian period from the African cultural perspective. On Arizona Illustrated, Ivy talks about choices that impacted the creation of the show, the meaning behind the name, and selecting fabrics.

“I just want people to see what goes on in my brain,” Ivy reflected. “I love to incorporate my African heritage in everything I do … Using the word gilded, it was for me, it was flipping it because Gilded Age, it’s associated with families that were wealthy during that time. I’m using the word gilded to describe privileged or wealthy, but as a Black person, so privileged to be Black. Wealthy to be Black. Blessed to be Black.” 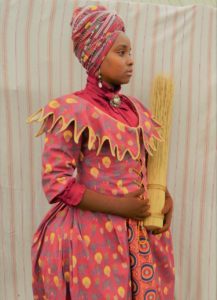 “The vision for this showcase was inspired by class work assignments taught by Professor Tuckett: TAR 596D Special topics in Theatrical Design. Our task was to create two women’s costumes. A 19th century Bodice and skirt with bustle and an 18th century corset, bodice and skirt with pannier. I did this using African inspired fabrics. The venue had to be Queen Anne architecture. I luckily knew a friend who kindly offered his home so that I may showcase my work. During my costume research I looked at the interior decor of black Victorian homes from the Gilded age. I kept all the furniture as I had found it, but I added my own flare. Since this room was a parlor I had cornbread and lemonade on the table, a wall dedicated to African gods, two black women dressed in Victorian costumes but adorning an African headwrap, entertaining a few guests. A wall of African masks, a wall of silhouette cut out. And a fainting couch in case you need a place to sit and reflect. I am grateful to everyone that helped bring this vision to life. Thank you.” 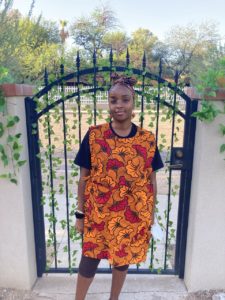 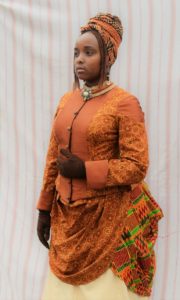 Ivy Wahome is a 2nd year MFA student in Costume Design and production. Most recently, she designed giant puppet costumes for Borderlands Theatre Company’s Nogales Barrio Stories 2022. She was the wardrobe head for Legally Blonde, and crafts woman for Polaroid Stories at Arizona Repertory Theatre. And was a principal dresser for the Lion King Musical tour in Tucson. Ivy is also a proud union member of I.A.T.S.E Local 415. She earned her BFA in Costume Design at The University of Arizona 2015 and worked in the costume shops of the School of Dance University of Arizona 2021.

Find out more about Ivy’s work at https://www.ivywahome.com/