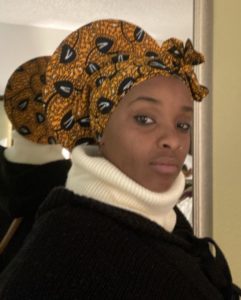 In a recent newsletter about the event, Borderlands included a Q&A section with Ivy, talking about the design process:

What was your inspiration for the Giant puppet costumes? How did you come up with the color scheme?

In this production, I was inspired by lace, aprons and ruffle collars of the 1960’s and the Quinceañera culture in the Nogales border. Creating the window for the puppeteer was the most challenging. However, this project gave me good practice for the next time I create giant puppet costumes.

Nogales Barrio stories is my second experience creating giant costumes. I am in charge of the 3 dresses and the two men’s shirts. Marc Pinate and I shopped for fabrics together. We decided that the two young girls are in plain pastel colors to represent their innocence and the woman is in a floral dress. Each dress comes with a lace covering that also functions as the window for the puppeteer.

The two men’s shirts are navy blue to represent maturity and plain pastel colors for the younger male character. 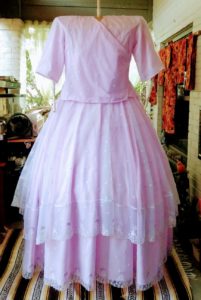 How does fitting a giant puppet differ from fitting an actor?

For my first Barrio story in 2016 we did not consider making it form fitting. But for the Nogales production the shape really mattered especially for the dresses. This time I made actual sleeves, a cinched waistline and wrap around blouse. To create the shape of the circle skirt I added a hoop under skirt crinoline.

For the men’s shirts I made sleeves, a yoke, collars and pockets. The only difference in making giant costumes is in scale. It’s easier to make patterns for these but the same technique is used in sewing as in making one for an actor.

My process is simple. I let the garment tell me who it wants to be. What type of character is behind the costumes? I look at it from an audience point of view. As a costume designer, I try to make it as realistic as possible but also functional. This experience has been very beneficial to me because I get to play with puppets.

Ivy Wahome is currently getting her Masters in Costume Design and Production at the University of Arizona( 2024). She worked for the Stevie Eller costume shop, University of Arizona from 2015-2021 as a firsthand. Ivy has been a technical crew member for Borderlands Theater since the production of Más. Recently Ivy has shown her work at the Tucson Museum of Art Biennial Showcase 2020 and at the InVisibility SALON showcase 2022.