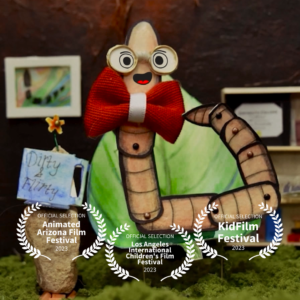 It’s a Worm’s World, a charming documentary about the vital role of the humble earthworm, has been officially selected to screen at three film festivals. It will be part of the 39th annual KidFilm Festival and the Los Angeles International Children’s Film Festival. Closer to home, it will screen at the Animated Arizona Film Festival.

The short film, directed by Film & Television seniors Kaleigh Brown and Jason Lee, made its premiere at the 2021 edition of What’s Up Docs, the annual showcase of documentary films made in Professor Jacob Bricca’s Documentary Production Class. Animation was provided by School of Art students Ashley Gutierrez, Danielle Hunt, Julian Kim and Gabriel Spencer.

“We are honored to be a part of these festivals and would like to thank Professor Bricca, Professor Antebi, and Inch by Inch’s Michael Morse and Raul Garcia for their guidance and insight,” said Kaleigh Brown and Jason Lee. “We would also like to thank the wonderful animators for the numerous hours of work they dedicated to bringing the earthworm’s story to life.”

The Dallas-based KidFilm Festival is the largest media arts event for young audiences in the United States. The Los Angeles International Children’s Film Festival has a history of moving careers forward, with more than 35 filmmakers and animators going on to work for major studios, and more than 25 becoming part of Oscar-winning teams. TFTV’s festivals and awards office, led by Kerryn Negus, tailored a film festival strategy for the film.