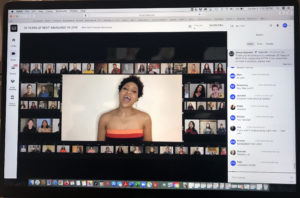 Performers reflected on the impact, both culturally and individually, that Jonathan Larson’s groundbreaking musical has had since its debut on the New York Theatre Workshop stage in 1996. For Tamika, RENT was the first show she landed. She learned invaluable lessons on the connections between art and life: “One day early in rehearsal, our director, Michael Grief, had us take an after rehearsal field trip to Soho to visit the actual Life Group that is depicted in the musical. We sat in the back and listened to people’s stories and feelings about living with chronic illnesses. To see the pain, promise and bravery in their eyes stuck me intensely. Over the course of those two hours I learned that our job as actors is purely to be vessels to tell stories as truthfully and honestly as possible. To be vessels for a bigger purpose and, that stuff isn’t about us at all. There is a privilege in telling people’s stories and … it should never be taken for granted or taken lightly.”

More information and streaming passes for “25 Years of Rent: Measured in Love” are available at nytw.org.