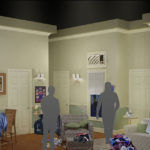 In a “normal” year, creative activity for Joe C. Klug, assistant professor of scenic design in the School of Theatre, Film & Television, would involve working as a scenic designer for a dozen or more shows with theater companies throughout the United States. This year, however, he says he has taken “the world’s worst forced vacation.”

But Klug – who traditionally uses small-scale physical models in his scenic design – has spent time over the past several months teaching himself computer-aided 3D modeling and rendering programs, which he says will help him fill a gap in his curriculum. He put those new skills to the test by remotely designing the set for a summer production of “The Odd Couple” at the Oregon Cabaret Theatre in Ashland, Oregon.

Read the story at UA@Work