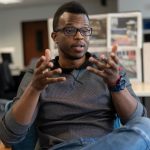 With over 300,000 subscribers, filmmaker and prominent YouTuber Darious Britt knows how to build a brand in an online world.

“Twitter and Instagram, I use them more like fishing nets where, you know, I catch the majority of fish, but then I can further edify and offer value on those other platforms,” Britt said.

Britt graduated from the University of Arizona School of Theatre, Film & Television in 2012 and toured his first short film, “Seafood Tester.” His first feature film, “Unsound,” won seven awards at the Pan African Film Festival in 2015.

In 2013, Britt created his YouTube channel, D4Darious, to build a platform through which to share his creations and teach his craft. Since its inception, the channel has gained 379,000 subscribers.

“YouTube is relevant in that it’s my platform of choice,” Britt said. “It lent itself most to what I do.”

Part of Day For Night: Conversations on Film and Television, a series from the University of Arizona School of Theatre, Film & Television. FREE admission but seats are limited. We encourage you to reserve yours now at d4darious.bpt.me.