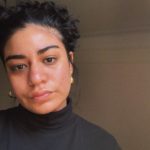 Fatimah recently sat down with Mark Pearson, the Executive Director/Artistic Director of College Light Opera Company, on CLOC’s weekly ‘Off the CLOC’ series to talk about her career in stage management.