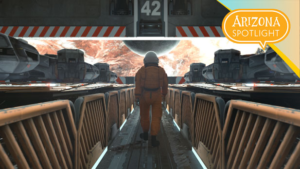 In a recent episode of AZPM’s Arizona Spotlight, film essayist Chris Dashiell took a closer look at four of the films that premiered at the University of Arizona School of Theatre, Film & Television’s annual I Dream in Widescreen event, including One-Way Mirror, Tebanasu, En La Cuna De Mi Madre, and Dropouts: An Overcast Documentary:

“One-Way Mirror, directed by Mackenzie Giguere and written by Giguere and Vaune Suitt, tackles a thorny subject with grace and nuance. A young African American woman picks up a white friend, more of an acquaintance really, to go to a Black Lives Matter demonstration together. The white woman’s father comes out to the car acting really friendly and hands the Black woman a hundred-dollar bill, she doesn’t want it but he insists. This later becomes an issue between the two women, as it turns out the Black woman is homeless and living in her car and the father had learned this – but she is offended at being treated like a charity case while her friend is surprised and bothered that she is not grateful. It’s an interesting take on the familiar theme of white liberals not understanding their own privilege. In this case, it’s not that the help isn’t needed but the offering of the help right off the bat without establishing a genuine interaction comes off as assuming an intimacy that is unearned. Giguere conveys all this by the simplest means, and it’s thought provoking without being pedantic.

The themes of mothers and their daughters is addressed in three of the films, one of them being En La Cuna De Mi Madre by Pablo Perez in which a middle-aged woman is asked by her brother to go check on their mom. She reluctantly goes and we eventually discover that there was a falling out many years earlier that wounded their relationship. Perez conveys the story through the woman’s flashbacks as she walks through her mother’s home, in which she sees herself as a child and then as a teenager. And these include memories of love and tenderness, this tapestry of past events brings an awareness that causes her to acknowledge her true feelings. The film remains subtle and understated.

Tebanasu is an intriguing music video by two brothers, Atreyu and Jonathan Hasenstab. Using some impressive special effects, they show us an astronaut walking towards a group of spaceships, cut to a young man driving to a downtown Tucson studio. He’s an actor in a film where he puts on an astronaut suit and is shown flying through space in a series of awesome science fiction style visuals. Later the young man is at home with his partner and daughter, but apparently part of him is still in outer space, as if two parts of his personality were striving to combine into one. I like how meanings are hinted at rather than directly explained here. With a little research I discovered that Tebanasu is Japanese for “letting go.”

Dropouts: An Overcast Documentary by Hasan Taleb and Tyler McEvilly is about a group of artists … who make music videos for a YouTube channel called Overcast, which from a humble beginning has gotten to almost 65,000 subscribers. The directors have made this film in an entertaining style that mirrors their subjects. They use quick and inventive cutting with many diverse shots, bold graphics, often funny snippets of conversation, glimpses of the artists at work, along with music and interview excerpts. And this style just carries the audience along with it, expertly evoking the sense of fun and excitement along with the hard work and long hours that go into being Overcast.”

Listen to the full story at AZPM