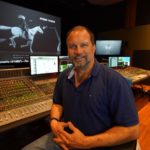 Scott Weber is a revered Hollywood sound artist with a host of awards to his name, including Emmys for his work on the hit shows Lost and Westworld.

In March, he got an unusual last-minute assignment: he was enlisted to work on the sound for 14 short movies created by senior film majors at the University of Arizona’s School of Theatre, Film & Television.

With the closure of campus, the students’ thesis projects had been derailed, like so many other things, by the coronavirus pandemic. The filmmakers were in the final production stages when the pandemic hit and they still needed to mix in sound.

The sound pro already had a connection to the university. His son, Jonathan Weber (’11), graduated from TFTV; he now works with Turner Broadcasting. Weber made several visits to campus when his son was a student, giving industry lectures to film and TV majors.

“We were so excited,” says filmmaker Alyssa Urgo, whose movie is inspired by the real-life story of her little sister’s adoption. “It was fantastic. Sound is so important, and he helped all of us.”
Read the story at Arizona Alumni Magazine