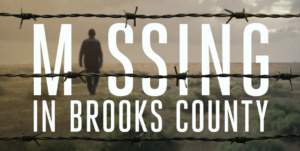 Tucson, AZ (October 15, 2020) – Missing in Brooks County, a gripping documentary that follows two families searching for their missing loved ones near the U.S.-Mexico border in Texas, has been selected to screen In Competition at the 2020 edition of DOC NYC, the country’s most comprehensive annual curated festival of non-fiction film. The announcement by the New York festival follows a string of acceptances into film festivals around the country. In 2021, the film will air nationally on PBS’s Independent Lens, the Emmy Award-winning television series presenting documentaries by the best independent filmmakers working today. The film is co-directed by Jeff Bemiss and University of Arizona School of Theatre, Film & Television instructor Lisa Molomot, and produced and edited by University of Arizona School of Theatre Film & Television Associate Professor Jacob Bricca, ACE.

The culmination of five years of investigative work, Missing in Brooks County provides a harrowing, on-the-ground examination of one of the deadliest corners of the United States. Located 70 miles north of the border with Mexico, Brooks County is the site of an estimated 3,000 deaths since 2008, as migrants try to circumvent the state’s busiest interior immigration checkpoint and find themselves lost in the vast private ranch lands that surround it.

Lisa Molomot: “Missing in Brooks County began as the story of one forensic scientist trying to identify migrants buried anonymously in the region. But each time we returned to film in South Texas the story got bigger, as we realized the complexity and severity of the situation. We met migrants, sheriffs and activists. Ranchers, rangers and vigilantes. Consuls, judges, and undertakers. If we held stereotypical beliefs about Border Patrol agents, law enforcement and Texas ranchers, they have been obliterated by our experiences making this film. Our goal became to convey the complexity of the situation we encountered.”

Jacob Bricca: “After Jeff and Lisa heard about what was going on in South Texas, our work began late in 2014 when I secured a UA College of Fine Arts Small Grant so that they could travel to Brooks County and begin research. It took well over a year of visits to the region for us to start to understand the issue in depth and to meet the people who would become the main subjects of our film. A second grant, this time a UA Faculty Seed Grant from the Office of Research and Discovery, enabled us to begin filming in earnest. At the end of a complicated journey, we hope that the film cuts through the sea of numbers and data of news stories and puts a human face on some U.S. immigration policies that can only be described as disastrous.” 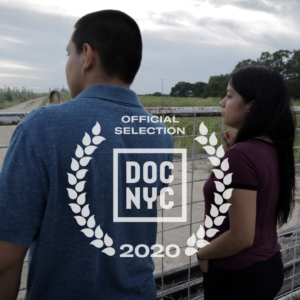 In addition to funding from the University of Arizona College of Fine Arts and the Office of Research and Discovery, Missing in Brooks County received support from Fork Films, the Perspective Fund, Human

Rights POV, the Arizona Commission on the Arts, the LEF Foundation, MountainFilm, the Connecticut Office of the Arts, and the UA Hanson FilmTV Institute. The film is executive produced by Abby Disney and Gini Reticker of Fork Films, Engel Entertainment, Sally Jo Fifer and Lois Vossen, and is a co-production of ITVS.

DOC NYC will screen the film online between November 11-19. Included with the screening ticket is an exclusive pre-recorded Q&A with Lisa Molomot and subject Omar Roman-Gomez, immediately following the film. More at docnyc.net/film/missing-in-brooks-county.

For additional information and assets, visit the Missing in Brooks County press kit.

The University of Arizona School of Theatre, Film & Television (TFTV) nurtures and develops outstanding artists and scholars via rigorous training and mentoring by internationally recognized faculty, high-level internship opportunities, industry-standard resources, and hands-on production experience. TFTV offers comprehensive training programs that aim to prepare students to succeed in a wide range of careers – in the industry, the arts, and higher education. Each year through Arizona Repertory Theatre productions, the Studio Series, and Film & Television screenings, students of TFTV are able to showcase their talents, tell compelling stories, and provide clear results of what happens in their classrooms and studios. TFTV’s Film & Television program regularly ranks in The Wrap’s “Top 50 Film Schools,” and the School’s Theatre programs regularly rank in Onstage’s “Top 30 College Musical Theatre Programs” and “Top 30 College Theatre Design & Tech Programs” making UA one of the country’s top institutions to study theatre, film and television. More at https://tftv.arizona.edu/