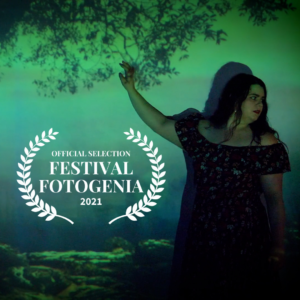 This week it was announced that Daughter of Eve, the short documentary by Linda Paola Varela (BFA Film & Television ’22), has been officially selected to screen at the Festival Fotogenia in Mexico City in November 2021. This marks the 30th festival selection of films made by students at the University of Arizona School of Theatre, Film & Television within the last year.

With the festival’s focus on film poetry, avant-garde films, video art & experimental cinema, Varela’s film would seem a natural fit. Daughter of Eve combines archival photography, projection work, poetry, movement, and music in an exploration of the societal sexualization of women and girls and how it has impacted the filmmaker’s own relationship with religion.

“I am honored to have been selected for Festival Fotogenia 2021,” says Varela. “As a Mexican woman, it means a lot to me that my first international film festival selection is for a festival in Mexico City, and especially a festival that honors work of a poetic, expressive, and experimental nature.

Making Daughter of Eve was a way for me to explore my relationship with my body, femininity, and faith. I grew up in a very Catholic and conservative town in Mexico and from a young age, I realized there was a sense of my body not belonging to me, but to onlookers. I noticed the constant comparison of the ‘good girls’ and the ‘bad girls’ (a false and damaging dichotomy where objectification happens at both extremes) and how things as uncontrollable as having large thighs or breasts could land a girl in the ‘bad’ category regardless of her behavior. I look forward to sharing my work with an audience who can relate to my experience and who can hopefully see that they are not alone in their struggles with their faith and themselves.”

Film & Television Professor Jacob Bricca added: “[Linda] explored her own highly personal and contradictory relationship to Catholicism in a uniquely creative way. The imagery of two dancers … was woven together with personal scrapbook photos and intimate recollections to create a narrative that blended personal history with religious introspection and a deep longing for transcendence. The result was one of the most original and creative productions of the year.”

Recently, Linda was also awarded a 2021 Creative Achievement Award after receiving a glowing recommendation from Associate Director of TFTV and Associate Professor Yuri Makino. The Arizona Arts Creative Achievement Award recognizes exceptional creativity in students who have earned respect as innovative and talented artists and scholars. These awards are traditionally presented to one undergraduate and one graduate student from Art, Dance, Music, and Theatre, Film & Television to honor those who have demonstrated exceptional scholarship, creativity, innovation, and passion for the arts.