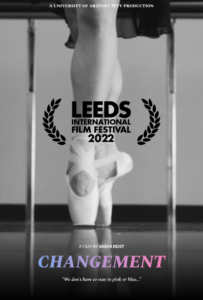 Changement, by Sasha Reist (BA Film & Television ’23, BFA Dance ’23), has been officially selected to screen at the Academy Award-qualifying Leeds International Film Festival. The short film, which tracks the experiences of dancers Cat Cogliandro and Mae Lever, touches on historical elements of ballet while opening up the discussion around more inclusive and welcoming language and narratives. Founded in 1987, LIFF is among the longest-running and largest film festivals in the United Kingdom.

At LIFF2022, Changement will screen in the Queer Short Film Competition. “I’m deeply honored that my film will screen at LIFF alongside a line-up of incredible shorts from around the world,” says Sasha. “I started this film with the hope that it would spark a conversation within the dance community about gendering and how we might make ballet a more inclusive environment. It’s gratifying that the film is striking a chord with dancers and non-dancers alike. I couldn’t have done this film without my incredibly talented film partner and friend, Jackson Hayes. I’m grateful to Professor Jacob Bricca, my mentor during the filmmaking process. I also owe a great deal of thanks to TFTV’s Kerryn Negus for supporting me in getting my film out there.”

Changement debuted at What’s Up Docs, the School of Theatre, Film & Television’s annual showcase of documentaries created in Professor Bricca’s Documentary Production class. In addition to the Leeds selection, the film was a 2022 nominee at the Rocky Mountain Emmy Student Production Awards and has screened at the Social Impact Film Festival, presented by Entertainment 2 Affect Change, and the Loft Film Fest.