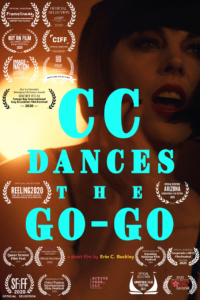 CC Dances the Go-Go, the latest short film by writer/director Erin Buckley and produced by School of Theatre, Film & Television Adjunct Faculty member Roweena Mackay, will screen as part of the 29th annual Arizona International Film Festival, April 14-25, 2021. The film follows Nicky, an aspiring actress, during a night at the local go-go bar where she Nicky encounters the woman of her dreams.

CC Dances the Go-Go will screen on Wednesday, April 21 at 7:30pm in the Club Congress Plaza. It will be screening virtually on Friday, April 23 at 1:00pm through the AZ Int’l Film Festival Site.