University of Arizona School of Theatre, Film, and Television mounts a polished and wildly entertaining production.

At first blush, Elle Woods summons the quintessential image of the exploitable blonde. You know, the kind that sparks the old witless jokes.

But we’re urged to believe it’s a mere façade, because this good-looking blonde is anything but dumb, having the wherewithal to graduate with a 4.0 and make it to Harvard Law School.

We first meet Elle as the president of UCLA’s Delta Nu Sorority, brimming with girlish vitality and flanked by a bevy of excitable groupies. She is slathered in pink and owns a chic little chihuahua in a pricey bag. A fashion major, she’s the modern avatar of conspicuous consumption.

That she qualifies for Harvard Law on scholastic merit might strain credulity, but Hollywood loves an underdog and the public cheers a trope-busting ingénue. And if not for Reese Witherspoon’s dominating brass on the big screen, we might be having a different discussion about its destiny as a musical adaptation.

Indeed the film is a formulaic comedy with a wafer-thin screenplay, but someone gleaned enough charm to pursue a theatrical development. Turn it over to an adept group of musical theater collaborators and voila – you’ve got a wildly entertaining enhancement that checks all the boxes for a modern musical comedy. 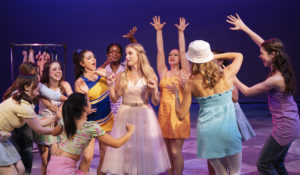 Now it makes more sense: LEGALLY BLONDE is supposed to be a musical. For one thing, it ups the ante for a large ensemble, transforming a casual throng of onlookers into a cohesive, rhythmic whole. Director/Choreographer Christie Kerr was well aware of this, utilizing a vibrant young cast to work as a synchronized conglomerate without losing sight of their individual savvy.

This is the sort of vehicle that calls for star material; anything less undermines the effort to splurge on production values. Arizona Repertory Theatre has a gold mine in Lillie Langston as Elle Woods, a spunky triple-threat talent with an absorbing charm to boot. She’s excellently matched with Clayton Lukens, who plays Emmett, the teaching assistant with a languid nonchalance that masks the resolute romantic. 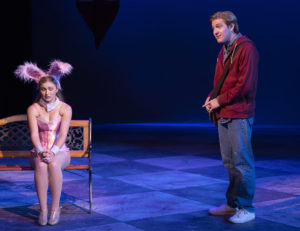 Ben Tyrrell is Warner, Elle’s overweening boyfriend and a caricature of male privilege. She thinks he’s about to propose, but no such luck because he plans to dump her for a more “serious” girl. Besides, he’s going to Harvard and his future is just not up to her scale of distinction. And what a comeuppance he gets when she takes on the challenge and ends up with an admission to Harvard – and graduates as the class valedictorian.

A few standout performances deserve to be mentioned. Grace Gebara plays Paulette the beautician, buoyant and nurturing like your good neighborhood-salon therapist. She’s incredibly attracted to Kyle, the UPS courier, assumed with a fleeting and steamy presence by Patrick Ryan. (Not many roles have the good fortune of stealing a scene with a few lines and a sexy swagger.) 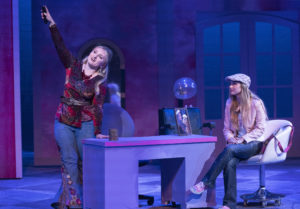 Lydia Schmidt is Vivienne, Warner’s new girlfriend, whose terrific voice should really earn her a solo number. Andrew Tong plays Professor Callahan, a smooth baritone with a refined smugness and a picture of the entitled patriarch.

And what do you do for a theatrical nod to the classics? Why, of course you roll out a Greek chorus, courtesy of a trio of bubbly cheerleaders in white, whom only Elle can see and hear.

Kudos to Christina Griffey‘s versatile set design, Alex Alegria‘s sensitive lighting work, and the stunning, elaborate costumes by Lindsay McDonald. Jamie Reed‘s consistent musical direction is impeccable, though we could use a more balanced sound production as some vocals tend to be harder to hear than others.

Not to get carried away, but in the current political storm that appears to put women on defense, it’s heartening to find sisterhood as an emerging national motif. The underrated monolith is galvanizing to topple a perverse establishment – and LEGALLY BLONDE, with its tongue-in-cheek, goofy affectations, is no less a clarion call for a political makeover. Whether or not the connection was a conscious part of the selection, the choice turns out to be a prescient one.

LEGALLY BLONDE is a production of the University of Arizona School of Theatre, Film and Television. Music and Lyrics by Laurence O’Keefe and Nell Benjamin, Book by Heather Hach, Based on the novel by Amanda Brown and the Metro-Goldwyn-Mayer motion picture. The show continues through the weekend at the UA Marroney Theatre.