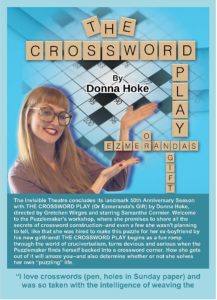 An accomplished scenic designer, director, and actor, University of Arizona School of Theatre, Film & Television alum Samantha Cormier (BFA, ’07) has been involved in productions all across the Tucson Theatre community.

Currently, Samantha is taking on the role of Puzzlemaker in THE CROSSWORD PLAY in a limited run at The Invisible Theatre, where she also recently directed Nia Vardalos’ play, TINY BEAUTIFUL THINGS (based on Cheryl Strayed’s best-selling book).

Recently Samantha was featured by Broadway World’s Robert Encila-Celdran where they talked about the production, some of the difficulties Samantha has overcome in her theatre journey, and some of her training tactics.

THE CROSSWORD PLAY runs through Saturday, June 25. For tickets and curtain times, visit The Invisible Theatre.