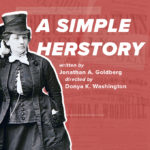 New work is based on a podcast about the 100+ women who have run for U.S. president

Update: This event has been cancelled

TUCSON, AZ (March 8, 2021) – The University of Arizona School of Theatre, Film & Television will present Jonathan A. Goldberg’s new play A Simple Herstory as part of a limited Arizona Repertory Theatre season. The production, directed by guest artist Donya K. Washington, stage director and producer at the Oregon Shakespeare Festival, will have two performances only on March 19 and 20, 2021 and will be livestreamed for free for audiences from the newly constructed TFTV Outdoor Stage.

A Simple Herstory is based on the podcast series of the same name, which places a spotlight on the more than one hundred women who have run for the U.S. presidency. The play focuses on Victoria Woodhull – stockbroker, newspaper publisher, woman’s rights activist and the first woman to run for president in 1872.

BFA Acting sophomore student Camden Stankus stars as a modern-day podcaster interacting with Woodhull, played by BFA Acting senior Sophia Goodin, in a work that is part radio play, part history examination, and fully centered on portraying all facets of a complicated human.

“One of the things I love most about Jonathan A. Goldberg’s script is that he doesn’t try to sand any of that down. [Woodhull] is here – warts and all,” says Washington. “So often when women run for president (or have high profile jobs), they are expected to fit into some kind of idealized box of what a woman like that is ‘supposed’ to be. I can’t help but think that’s related to the trope – ‘I’d vote for a woman, just not that woman.’ So many of the women who’ve run in recent times are ridiculously qualified – whether or not you agree with them politically is beside the point when it comes to their resumes.”

Marking Arizona Repertory Theatre’s first production since the onset of the pandemic a year ago, A Simple Herstory has been created incorporating safety protocols every step of the way. The company participated in preliminary play readings via zoom. The blocking of the play was achieved in person with four actors at a time. At rehearsals, cast and crew were masked and maintained social distance. “It’s a non-naturalistic play and a bit experimental,” said director Donya K. Washington. “It lends itself to a more presentational staging style, which made it easier to incorporate COVID protocols as part of the style, rather than as something separate.”

“The ‘pause’ that is necessary because of the pandemic has created an enormous void for all of us. But it also has made space to carefully consider how to safely and responsibly get back into production, reconnecting with our audiences in an innovative way,” Arizona Repertory Theatre Artistic Director Hank Stratton said. “Herstory has given us an opportunity to work on new material that was originally created for another digital medium, the spoken word/podcast. We are honored to have Donya K. Washington guiding our return, sharing her professional experience and powerful artistic vision with our students and audiences.”

Guest artist Washington is a stage director and producer who has produced and directed works for theatres such as Actor’s Express and Alliance Theatre’s Theatre for the Very Young. Currently serving as Festival Producer at the Oregon Shakespeare Festival, Washington has been in Tucson during rehearsals working directly with students.

A Simple Herstory has an approximate run time of 166 minutes, including a 15-minute intermission after Act One. The production will be performed and livestreamed twice. Performance dates are March 19 and 20, 2021, at 7:30pm MST each night. Watch the livestream for free at watch.tftv.arizona.edu/a-simple-herstory/. This production contains the following which may be considered offensive or uncomfortable: racial language from the time period, some descriptions of rape and nudity, depictions of drug use, and stylized depictions of violence.