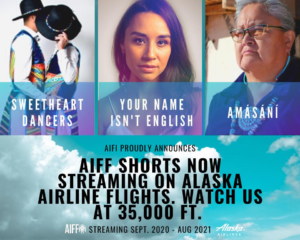 Starting September 1, 2020, and running through August 31, 2021, a series of Indigenous films will join the programming on board Alaska Airlines flights. As part of a commitment to featuring diverse works within their Alaska Beyond™ Entertainment flight programming, the airline will showcase films selected from leading film festivals such as the Los Angeles Asian Pacific Film Festival, Frameline LGBT Film Festival, and American Indian Film Festival, among others, from September 1st onward.

Among the films selected is Amásání, the short film by Stacy Howard (BFA ’17), which debuted at I Dream in Widescreen 2017. The film follows a young Navajo girl after she gets suspended from grade school and is forced to stay with her Amásání (grandmother) – though resistant at first, the young girl learns more of her Diné culture and language while bonding with her grandmother. Stacy’s film has been selected to screen at more than a dozen film festivals around the country and made its international premiere at the ImagineNATIVE Film + Media Arts Festival in Toronto in 2017.