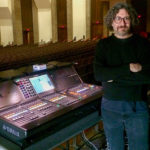 At 7 years old, Matt Marcus was starring in a radio play written, performed and exclusively enjoyed by him and his group of friends. He jokes that it might as well have been titled “Knights in a Castle Who Burp a Lot.”

This low-budget production was the beginning of a lifelong love affair with radio that would ultimately bring him to his current job as an instructor of sound design in the School of Theatre, Film and Television.

This year’s World Radio Day, which is observed on Feb. 13, celebrates the approximately 125-year-old technology’s ability to educate and entertain people as well as its role in providing a platform for democratic discourse. Marcus says the concepts used in creating some of the earliest radio programming continue to shape his curriculum and professional practice.