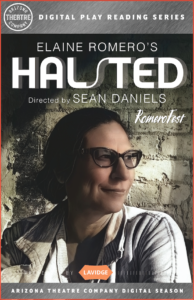 On March 10, Elaine Romero’s HALSTED kicked off RomeroFest, the month-long international festival celebrating the diverse and impactful works of playwright and School of Theatre, Film & Television Associate Professor Elaine Romero. The play is in its early stages of development, and following just six days of rehearsal has attracted attention and accolades for its delivery and poignant narrative.HALSTEAD, an autobiographical play focusing on the events, experiences, and feelings connected to a stroke, examines how we love and find hope when we don’t have the words.

Broadway World Critic Herbert Paine: “In a profound and meaningful way, Romero has rendered more than autobiography. HALSTED is a deeply engaging allegory about the vital importance of connections, connecting, and connectivity. In every exchange, we are drawn closer to the power of the heart and mind to overcome and to the exhortation to cherish the now and fulfill possibility.”

RomeroFest will feature live and prerecorded online presentations of twelve of her most distinguished plays by theatre companies across the U.S. and in Mexico throughout March. The festival is a collaboration between Arizona Theatre Company, the Scoundrel & Scamp Theatre, and Winding Road Theater Ensemble. Further details of RomeroFest are available at www.arizonatheatre.org.